Scott Hall ruled the squared circle throughout his career. During this time, he had no time for wrestling figures or being a mark. Bret Hart, on the other hand…

Scott Hall – “I love Bret Hart, but when I left his house I didn’t feel the same way about him.”

In an interview with In Your Head Radio, Scott Hall opened up about his own wrestling figures, gifts from fans, and Bret Hart:

I got like 50 [Scott Hall] wrestling figures. You know how cool that is? Did I ever collect them? No.

I never did, bro. And that’s my problem.

I can remember sometimes we’d be in Europe and [places] like that and people would bring you a portrait. These people would hand-paint a portrait of you and bring it to you in the hotel. And they’d like, hand it to you and you’d go, ‘Thank you so much…’ And you’d take it up to the hotel room and you’d leave it there. Cos you don’t wanna hurt their feelings…[but] I can’t lug this thing around for another 10-12 days on the road…

Now, looking back, if I’d have been mature, I would have shipped it home and I would’ve had it in my gym and all that kind of stuff. I never saved any of the magazine covers and any of that kind of stuff. Because, you know, when you’re out there running and you’re doing it and you are ruling the world, you don’t care.

Now, getting in the twilight of my career…my kids are grown… Now people go, ‘You used to be that wrestler guy, right?’ And I go, ‘Yeah.’ And I wanna go, ‘Come on in my gym here…let me show you all my stuff. I used to be a big deal…’

But I never saved any of that stuff.

My mom does…my mom has every Scott Hall doll, every magazine cover, everything…she’s got it all up in her attic.

I’ll never forget one time we were wrestling up in Calgary, right? And Bret had everyone over to his house – which is really kind of him, ‘cos a lot of guys don’t want a bunch of wrestlers ’round their family, [they’re] like, ‘Nah, this is where we draw the line…I don’t want a bunch of jocks hanging ’round my house…’

But Bret has everyone over. And I gotta admit… I love Bret…[but] when I left his house I didn’t feel the same way about him.

He was married back then to his lady he has babies with…and above his bed was a portrait of Bret in his, like, ‘Sergeant Pepper’ jacket…you know, pink with the tassels on.

I mean, I ain’t saying it wasn’t cool…I’m just saying…whoa, bro…over your BED? Are you ribbing me?

I grew up doing jobs, you know?

I used to be 290 [pounds], jacked up on steroids… I was out there, Kansas City, doing jobs for dudes who were 60 and had no teeth. This is back when it wasn’t ‘sports entertainment’ – it was WRASSLIN’. We still sold it as being ‘real’.

I would go in bars and people would go, ‘Wait a minute…you do that wrasslin’ stuff, man – that stuff’s FAKE.’

I grew up knowing that this business is entertainment. I know that it’s a show…I’m not saying we’re not good athletes and we don’t get hurt…I’m saying it’s a show. And I never grew up a…we call them ‘marks’…I’m not a mark for myself. 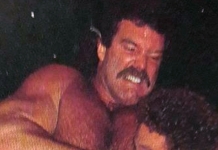