Kerry Von Erich’s life had reached a turning point in the worst possible way. Von Erich–a former NWA world heavyweight champion–was already battling with drug and alcohol addiction when he took his motorcycle out for a spin in Argyle, Texas on June 4, 1986. It should have been a happy time in his life. His wife was due to have their second child later that summer, and Von Erich was one of the top stars in the world of professional wrestling. He was a hero to thousands of fans across the country.

The Accident that Changed the Life of Kerry Von Erich

While attempting to pass a truck on a two-lane road, Von Erich crashed into the back of a police car. The resulting wreck crushed his right foot and dislocated his hip. Matters were made worse sometime later when Von Erich attempted to walk on his already damaged foot well before it had healed. As a result, his foot was amputated.

During the recovery process, Von Erich’s wife, Catherine, gave birth to their second daughter, Lacey, on July 17. Lacey would go on to have her own notable wrestling career before starting an advertising agency in southern California.

Kerry Von Erich on Wrestling after his Foot was Amputated

Kerry Von Erich’s wrestling career should have been over. But the amputation was kept under strict secrecy, and Von Erich worked himself back into tremendous condition and re-entered the ring. People forget how athletic the Von Erich boys were–even a diminished Kerry Von Erich was still an incredibly gifted athlete. In the latter days of World Class Championship Wrestling, Von Erich would enter the dressing room with his boots already on in order to keep his disability hidden from his co-workers. The story was that his ankle had been broken and “fused” into a position where it could not move. (Sidenote: “Fusing” an ankle joint is a legitimate medical procedure, which lent Von Erich’s story some credibility. Historically, patients with problems such as polio or club foot might have this done in order to help them walk more normally.)

Of course, this secrecy also led to one of the more embarrassing moments in Kerry’s career, when Ed Wiskoski (then working as Col. DeBeers) accidentally yanked off Kerry’s boot during a live AWA event, exposing the amputated stump during a match at the Showboat Hotel in Las Vegas, Nevada.

But even after that, Von Erich went on to the WWE, debuting as the Texas Tornado and getting into high-profile feuds with other gifted grapplers, such as ‘Mr. Perfect’ Curt Hennig. He even won the Intercontinental title from Hennig, holding that championship for nearly three months before dropping the title back to him. But by this time, Von Erich was dealing with a painkiller addiction, and he found himself falling down the card for the WWE. After finally being released, he worked in Texas again–this time for the Global Wrestling Federation.

By this time, Von Erich’s demons had gotten the better of him. He was arrested once on a drug charge and received a probationary sentence. After a second drug arrest, he was looking at potentially spending a significant amount of time in prison. He committed suicide instead, firing a single bullet into his heart while at his father’s ranch in Denton County, Texas.

In his autobiography, former WWE champion and hall-of-famer Bret Hart wrote that Kerry had told him months before about his plans, that he had wanted to follow his three late brothers, and that they were calling him. He died on February 18, 1993.

Kerry Von Erich was posthumously inducted into the WWE Hall of Fame in 2009.

Related: KEVIN VON ERICH on Being the Last of the Von Erich Brothers Left Alive 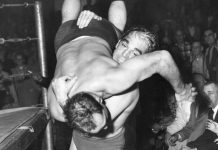