Nowadays, Ric Flair and Mick Foley get along just fine. However, this wasn’t always the case! Real-life animosity between the wrestling legends dated back to 1991, and for the next two decades, disdain between the two intensified, leading to a real-life backstage encounter where a punch was thrown.

"Mick Foley was not a great worker." – Ric Flair

In 1991, Ric Flair was heading the booking committee in WCW when Mick Foley was getting his start with the company. In his book Have a Nice Day, released in 1999, Foley wrote, "Ric Flair was every bit as bad on the booking side of things as he was great on the wrestling side of it."

Flair didn’t see potential in Mick Foley at the time, which led to Foley harboring some animosity towards Flair.

While Ric Flair claimed he never read the comments made about him in Mick Foley’s book, in his book To Be the Man, released in 2004, Ric Flair had some belittling comments to share of his own.

"Foley has a cult following because of his contribution to hardcore wrestling, but hardcore is such a small part of the history of this business. When I was training, falling off a ladder was not a prerequisite to making it as a professional wrestler.

"I don’t care how many thumbtacks Mick Foley has fallen on, how many ladders he’s fallen off of, how many continents he’s supposedly bled on, he’ll always be known as a glorified stuntman."

As for hardcore wrestling in general, Flair didn’t hold back there either. "What about people who never did anything else, like the Sandman? He’s no wrestler. Hardcore became a niche for a lot of guys who couldn’t do (anything) in the ring.

"I’m not saying that Mick Foley wasn’t a star, that he wasn’t a great attraction. But in my estimation, Mick Foley was not a great worker. He couldn’t punch. He couldn’t kick. In the World Wrestling Federation, he’d spend half the day sucking up to the writers — because he’s such a fan of himself."

Flair concluded by comparing the talent of Mick Foley to the likes of Ultimate Warrior and Brutus Beefcake.

"There’s a difference between being a great performer and being a guy — like Brutus Beefcake or The Ultimate Warrior — who became famous because he happened to be working for Vince (McMahon). It’s the same with Foley. When he hasn’t been working for Vince, there’s been no demand for him whatsoever. He’s just another guy."

Offended by the words written about him in Flair’s book, Mick Foley threw a few jabs towards him in a Ring of Honor promo against Ricky Steamboat in October of ’04.

On December 13, 2004, at a Raw taping at the Von Braun Center in Huntsville, Alabama, Ric Flair was in the cafeteria talking with his friend and WWE road agent at the time Arn Anderson when Mick Foley approached.

Armpit Wrestling reports that Foley had a book in his hand that he wanted Ric Flair to sign so that it could be auctioned off for charity. Before signing the book, Ric Flair went to shake Mick Foley’s hand, but Foley refused.

Flair, perturbed by Foley rejecting the handshake, threw a punch that ended up connecting. The two of them were quickly broken up, but a heated exchange ensued.

Foley quipped to Arn Anderson that he should lock them in a room together, which references what Flair did to Eric Bischoff a year earlier when Flair physically attacked Bischoff.

Flair didn’t find this funny and responded with, "Fine, pick a room, and may the best man walk out! Better yet, I’ll walk outside and get into the ring."

Flair began walking through the mostly empty arena towards the ring when Foley called out, "I’m not going to fight a 55-year-old man!"

Flair returned with, "It wouldn’t matter since you couldn’t anyway. You’re not some big, tough fighter. I could beat you!"

At this point, John Laurinaitis stepped in an attempt to mediate the situation. Flair and Foley continued cutting promos on one another.

Flair would say to Foley, "You’re not even in the same league as me or any of the guys I wrestled over the years like Bruiser Brody, Harley Race, or Ricky Steamboat."

Foley would rebuttal by bringing up money, asking who had drawn more over the years to which Flair allegedly admitted that Foley had. Foley then questioned why Flair wanted to work a program with him in WWE, to which Flair responded, "I didn’t ask to have a program with you, but if management had asked, then I would."

Foley followed up by saying, "I wouldn’t work a program with you. It would be rewarding bad behavior, something I wouldn’t even do with my own kids."

Foley concluded by telling Flair that he read the original manuscript of Flair’s book, which was a lot harsher on Foley than the version that would officially get released. Unhappy by this, Flair was later overheard saying he might sue whoever was responsible for leaking that info to Foley as it was supposed to be confidential.

Many in the company felt the entire dispute between Ric Flair and Mick Foley was a work though both men hold to saying that it was a shoot. Nobody was punished for what took place backstage.

In 2006, the two would eventually end up working a program together despite Foley saying a feud between the two of them would be rewarding bad behavior.

Blurring the lines between shoot and work, their real-life hatred towards one another became storyline fodder. The "glorified stuntman" quote was even used in promos in the build-up to their two-out-of-three falls match at Vengeance.

Flair would end up winning 2-0, with Foley losing the second fall by disqualification. Two months later, an unmerciful "I Quit" match between the two at SummerSlam took place, which also saw Flair winning.

Nowadays, the two are said to be friends after working out their differences while sitting next to each other on a plane ride. 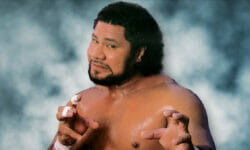 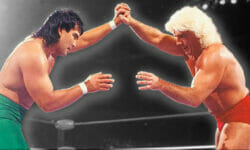 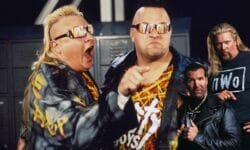 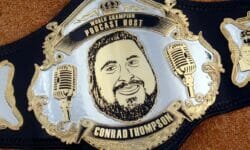 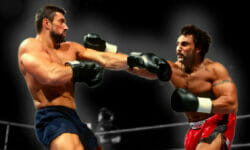 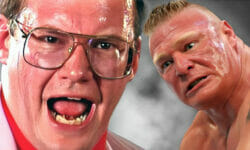 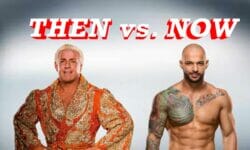 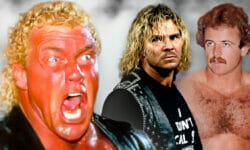