With today marking 15 years since the passing of Eddie Guerrero, it’s hard not to think about how he would have been 53 years old. It feels like yesterday — the news hit me like a punch in the gut.

On November 13th, 2005, Chavo Guerrero found his uncle unresponsive in his hotel room in Minneapolis. Chavo performed CPR until paramedics arrived, but it was too late. Eddie Guerrero had died. He had just turned 38 the month prior.

It’s still hard to believe Eddie Guerrero is gone. His personality, antics, and wrestling ability lit up any wrestling program he was part of. That irrepressible rascal can’t be gone. Not for good. He’s just … not here right now. Maybe he slipped around the corner for a cup of coffee, or maybe he’s chatting up someone down the hall. He’ll be back soon.

It feels like yesterday. I remember hearing the news of the death of Eddie Guerrero. It hit me like a punch in the gut. I had to sit down. Like many American fans, I had first become aware of Eddie through his battles against Dean Malenko for the ECW TV title in the mid-90s. In otherwise blood-soaked cards, they put on wrestling clinics for Paul Heyman’s company before taking the money deals that would send them to WCW.

It wasn’t until years later, thanks to the magic of YouTube, that I saw Eddie Guerrero teaming with Art Barr as La Pareja del Terror, a part of the AAA stable of American wrestlers known as Los Gringos Locos that included Louie Spicolli and Konnan. Guerrero and Barr were heat magnets — I mean they were thermonuclear — in a feud with El Hijo del Santo and Octagon.

At 1994’s When Worlds Collide pay-per-view, Barr and Guerrero lost a double hair-vs.-mask best 2-of-3 falls match in front of a sold-out crowd of 13,000 screaming fans.

The match is a masterpiece.

Dave Meltzer rated it at five stars in the Wrestling Observer, and it holds up. The crazy-good charisma of both Barr and Eddie is off the charts here, and you see why he began making forays into ECW and then signing with WCW. Eddie Guerrero was already a master of his craft, and he was about to take to a much larger stage.

As part of the Monday Night Wars, Eddie Guerrero was a solid mid-card performer. He had great matches again with Malenko, with Chris Benoit, Rey Mysterio Jr., Ric Flair, and a host of others. But his size was a problem in WCW.

Generously listed as 5-feet, 8-inches tall, Guerrero wasn’t the imposing figure WCW was looking for at the time. The company, at least on TV, was a home for giants. Hulk Hogan, Paul Wight, Kevin Nash, Goldberg, and Scott Hall were all part of the main-event scene in WCW. It didn’t matter how talented Eddie was — he wasn’t getting near the main event for any extended period of time.

He held the WCW cruiserweight title and the US championship. But that was it. Eddie and his compatriots — Malenko, Benoit, and Perry Saturn — were banging their heads against the glass ceiling. They were also watching their friend Chris Jericho make a splash in WWE, and when they had the chance to jump ship from WCW in 2000, they never looked back.

Guerrero and company debuted as The Radicalz (see, they’re edgy because they spelled their faction name with a ‘Z’), but Eddie broke out when he teamed up with Chyna, and the WWE creative team allowed Eddie to just sort of be Eddie on TV. He showed flashes of the brilliance of his later “Lie. Cheat. Steal.” gimmick, and he was still brilliant in the ring against the brand-new competition. He was the unlikely breakout star from the Radicalz, but there was no glass ceiling for him in WWE. The sky was the limit.

But Guerrero’s substance abuse problems would come into play.

Eddie Guerrero was released from WWE after being arrested for DUI in late 2001. He worked independent dates, stayed out of trouble, and was back in the WWE on April 1, 2002. He teamed with Chavo, and his work on the microphone and in the ring was the highlight of the Smackdown! programming. He was so over that WWE brass couldn’t deny him the biggest prize in the sport, and Guerrero was booked to defeat Brock Lesnar for the WWE Undisputed title at No Way Out in 2004.

He overcame a serious addiction to alcohol and painkillers, but they’d already done their damage. What we couldn’t see — because Eddie wouldn’t let us — is that he was in constant pain. He was hurting, and the stress of wrestling (along with the constant grind of being on the road) was taking its toll on him.

Multiple wrestlers have commented that they would see Eddie limping in the back, barely able to get dressed, and then when he went through the curtain — there he was, miraculously whole. The autopsy report on the death of Eddie Guerrero revealed that it was a result of acute heart failure due to underlying atherosclerotic cardiovascular disease.

Friend and competitor Kurt Angle posted on the death of Eddie Guerrero on the twelve anniversary of his passing on Instagram, and his words resonate:

Len Rossi – A Gentleman In and Out of the Ring

Bruiser Brody – His Final Moments and the Deceitful Trial That Followed 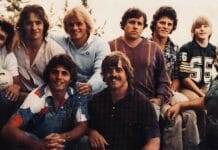