Here is the tale of how I, a middle school social studies teacher, found myself in the crazy world of professional wrestling and the random battles I faced to get there.

(Spoiler: It was worth it!)

My commentary partner and I realized that we did not know each other’s names. We only had minutes before cameras were rolling to know backstories to carry us through a 3+ hour show.

The Veterans Memorial Coliseum was hosting the World Wrestling Alliance as they put on one of their biggest shows of the year: The War.

The event consisted of a handful of undercard matches and a main event similar to a “Royal Rumble” match in WWE. The champion enters at the number one spot and is forced to defend their title against everyone who enters. The last person standing is the WWA Champion.

I had those details scribbled into my slightly discolored white three-ring binder on a page labeled “WWA notes” in black sharpie stuffed into the front pocket.

Other notes in the notebook included a list of WWA champions with brief title histories, short biography paragraphs for key wrestlers, and as many feuds, finishers, and hometowns as I thought would be essential to know.

I needed to give a strong impression. Tonight would be my debut in professional wrestling.

I was to be one of two accompanying voices telling the story of the night, and if I were any less than exceptional, the diehard fans would eat me alive, and the company would spit me out.

I had dreams of wrestling since childhood. The 2004 Royal Rumble pay-per-view was on DVD at my friend’s house one weekend I stayed over. My parents never wanted me to watch wrestling. However, they should have realized that making something off-limits made it that much more fascinating. It was my ark.

We were glued to the show, which featured such incredible matches as Eddie Guerrero vs. Chavo Guerrero Jr., Rey Mysterio vs. Jamie Noble, and anything that was not “Sparkplug” Bob Holly vs. Brock Lesnar.

The main event was the icing on the cake as it was an over-the-top-rope Royal Rumble match. It featured some incredible stories such as:

The match kept me on the edge of my seat with drama, suspense, and what looked like incredibly painful showmanship.

I knew my father told me wrestling was fake a while ago, but how the heck do you fake John Cena suffering a knee injury after being thrown to the floor by the “World’s Largest Athlete” Mark Henry?

Looking back, the match had its flaws, including Earnest “The Cat” Miller, too many distractions and outside interferences, and making the hero a man who would later viciously slay his wife and child. Despite all of this, I knew that I would eventually work in professional wrestling the moment the match ended.

At 22-years-old, I was amidst my student teaching, completely broke, actively being cheated on by a girlfriend, and on some nights, not necessarily sure where I would be sleeping, although that last one was my fault.

I decided if enough was going to fall apart around me, I might as well follow through on my dream to work in professional wrestling.

What a perfect time to learn from a post shared from an old high school friend that a World Wrestling Alliance show was coming up in Central City, Kentucky.

I was not sure where Central City was (I still couldn’t tell you), but I went there and sat in a room that desperately needed air conditioning, watching as wrestlers slammed each other against the mat to make the crowd of perhaps 150 feel like 150,000.

After the show, I waited in the lobby with another young man named Zach as the talent tore down the ring and put things away. Zach spoke with the promoter first as I waited. Once Zach returned, it was my turn to talk with Chris.

I handed Chris a paper resume. Yes, a resume complete with broadcasting experience, accolades, and references, simply because Xavier Woods mentioned doing that in a podcast once!

While I have never asked him, I am reasonably confident Chris never read it and instead threw it away the second after I left.

I expressed that I wished to train to wrestle but was far more experienced speaking due to my musical and performative background.

“Can you make Saturdays?” Chris, the promoter, asked.

I had recently decided to step away from music and was searching for something creative to do away from the monsters and creeps in my local music scene. I also acted briefly in a handful of shows at the Public Theater of Kentucky. However, I decided it was best to take a break after a Christmas show in a trailer park proved to be the single worst theatrical performance by any group of humans in history.

The performative itch for self-obsessed Tauruses like myself will always inevitably need to be scratched, and that scratch appeared to come in local independent wrestling, the highest of arts.

“Yes, as long as I can ask off of work in time,” I responded, knowing very well that any of my three jobs at the time could ask me to work a Sunday, and I would have no choice.

The plan was for me to begin wrestling training that Saturday.

That Friday, I was chaperoning a Valentine’s Day dance for the school I was working as a student-teacher. Amongst the sea of middle school students on the dance floor was another student teacher, who asked me to dance. Why not?

We danced back and forth for a very brief period before SNAP!

This had happened a few times before, but good lord, it did not feel like this.

I collapsed to the floor to see my leg above and below the knee no longer in a straight line. After years of playing through football and roller hockey with knee injuries that went untreated, I had given myself a bucket-handle meniscus tear and would require surgery.

The estimated recovery time was two months for unassisted walking and six months before returning to high-impact physical activity.

My wrestling dreams were over the night before I was to begin training.

After a year of healing my knee and teaching during what felt like the end of the world, I contacted the World Wrestling Alliance once more to ask if the offer was still on the table for a broadcasting position.

Through much persuading, Chris offered me one more shot at commentary.

In the meantime, I appeared amongst the fans at shows in Eddyville and Owensboro, Kentucky, entirely in character with a suit, terrible mustache, and notebook to take coaching notes.

Many of the wrestlers in the first two shows thought I was a talent scout from the more widely recognized NXT or AEW!

Nevertheless, I would assist in tearing down the ring after the shows and, over time, established rapport with many wrestlers who’d give priceless advice from their experience in the business.

They explained that many wrestlers found where their characters were going and the character they wished to emulate while in front of the fans. I made notes like the “mark” that I was.

The answer to the wrestler I wished to emulate was the late Bobby “The Brain” Heenan.

Bobby was sometimes a wrestler, sometimes a manager, but most fondly remembered as the color commentary partner to Gorilla Monsoon. In my opinion, Bobby’s most impressive performance on commentary was during the 1992 Royal Rumble, a match nearly the same as the one I would be calling on commentary.

Bobby was paired up with the polarizing Ric Flair. “The Nature Boy” drew a mixed reaction with half of the fans booing him for his misdeeds and the other half cheering him for his incredible wrestling ability and legendary matches such as his ones with Ricky “The Dragon” Steamboat.

The plan to make the fans genuinely despise Ric Flair was to align him with Bobby Heenan and allow Heenan to be as obnoxious as possible. And so, Heenan took the assignment and aced it.

He was the biggest weasel in the world after his client entered the rumble at number three and fought through a sea of characters that tried to end him from Big Bossman, to The Undertaker, to “Rowdy” Roddy Piper.

With Flair using every underhanded technique in the world, Heenan would cheer. Every time Flair received his well-deserved comeuppance, Heenan would chant his running line of the night: “That’s not fair to Flair!”

Flair would win the match, win the WWF Championship, and become an immediate sensation to fans who had not yet seen his work.

I knew how well it worked for Heenan and Flair and knew that the best elements from any form of art came from recycling and adapting older works. That would be my game plan of the night.

I had three main goals set in front of me for The War:

“My name is Ian, but my kayfabe character name is Colonel Harper,” I responded to my commentary partner.

“Drake Hicks, but I go by Drake Jaxson on here. Just call me by my first name so you don’t confuse it,” my commentator partner responded. “Do you know if we have a story for why you are on commentary?”

“Businessman from New York with a sketchy past who is talent scouting to pick up a client.”

“Is there a client planned?”

“D***. Well, if I cut to break, lay off so the edits are clean and make sure you don’t talk over the ring announcer.”

“Got it. Thanks for the heads up. If you have any notes during the night, let me know.”

“Can do. Looks like we’re just about live, and… Welcome, everybody to WWA Hysteria: The War. Indiana’s Biggest Battle Royal is tonight! I am Drake Jaxson…”

We sprang into the night with contest after contest delivering heavy-hitting matches.

This was one of the promotion’s biggest nights of the year, and they needed to show the fans the best they could offer.

By the time we reached the main event, I was sweating through my suit. I had started at 100 MPH, and now my tank was running on empty. How is talking this difficult? How does Jim Ross make it look so effortless?

I punched my catchphrase into every opportunity, pausing to mark out how unfair Munchie’s return was and also making silly puns that only I enjoyed.

The match was well over an hour, but it felt like it flew by me at the speed of light.

The Evansville, Indiana, crowd screamed with anticipation at every entrant and elimination.

In the end, it came down to Vanderpool facing off against the promoter’s brother, a much stronger and more experienced fighter named Ray Waddell. With help from a man named Nick Depp that Ray was feuding with, Vanderpool used a distraction to his advantage and, much like Ric Flair, he dumped Ray over the top rope to retain his WWA Championship.

The bell rang, the ring announcer named the winner of the match, and I dropped my previously established catchphrase for a new one that I had lifted from the movie Miracle On Ice with the ever immortalized: “Do you believe in miracles?” 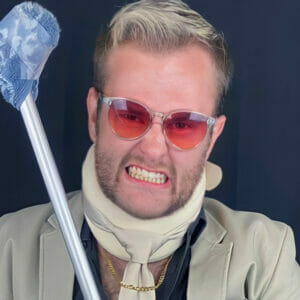 Ian Matthew Harper is a Kentucky Colonel and Jefferson Award-winning teacher from Lockport, New York, residing in Bowling Green, Kentucky. Additionally, he is a freelance writer, professional wrestling personality, and lead producer of The Colonelcast podcast. He can be reached by e-mail at thecolonelcast@gmail.com.