Pro Wrestling Stories
9.2K shares
June 28, 1998, marked a day many wrestling fans around the world collectively shrieked, ‘Holy s#@t!’ at their television screens. On that day, a match took place that now lives on in infamy. It has since left a permanent mark on the psyche of the Undertaker, Mick Foley, and fans alike.
Here, Mick Foley and Undertaker explain what really happened during their legendary 1998 Hell in a Cell match and the inspiration behind Mick’s fall.

The Inspiration Behind the Legendary Hell in a Cell Fall

“Man, that was a good one! We were having a good time thinking completely ludicrous things to do inside, outside, and on top of the cage.

“After a while, I got serious and said quietly to Terry, ‘I think I can do it.’”

Foley took his ideas to the Undertaker, who at first was hesitant to do them. Taker even staunchly questioned, ‘Mick, do you want to die?’

"When I tossed him off of the cage, time stopped.

People say they have out-of-body experiences. Standing on the cage and watching him fly, I could actually see him and I standing up there.

It was such a violent impact. TV doesn’t do it justice, as far as the sound."

“I remember having two distinct thoughts: I was falling really fast, and that the table looked really small."

"The second [fall] was far worse.

His tooth had gone through his lip and was lodged in his nostril. He was bleeding from the mouth.

You can look in someone’s eyes and tell that they’re not there. For the next two to three minutes after that fall, Mick wasn’t there."

“That match is an emotional roller-coaster ride. I pieced back all of the matches in my memory except for about a 30-second period when I went through the cage and into the ring. There was a point where I saw a pair of sneakers in the ring, and I had no idea how they had gotten there. So there were 30 or 40 seconds there that had gone by that I couldn’t remember, and I’m still not aware of. The day after, I had very little recollection of what actually happened.”

"Mick cared about what fans thought and felt it was his duty to perform. He stuck it out."

“Vince McMahon came up to me [afterward] and said, ‘Mick, you have no idea how much I appreciate what you just did…but I never want to see that again!’

I guess the match really got people talking, and it did lead to a lot of other things, but from a match standpoint, I’ve had a lot of other matches where I didn’t get knocked out that I’m kind of proud of as well, but that’s the match everyone always goes back to.

Kevin Sullivan, who was booking WCW at the time, later told me that once he saw that, he told people that the tide had turned. He said he knew right then that WWE was going to pass them and that they’d never catch us again.”

Kevin Sullivan was right. This match played a critical role in the then World Wrestling Federation securing higher TV ratings over WCW, who, for 82 straight weeks, had a lead over WWF during the Monday Night Wars. It was through matches like this one that led WWF to the top again.

After the match, Mick Foley had a long heart-to-heart with his tearful wife on the phone. This conversation almost led him to retire from pro wrestling altogether, something he eventually did on a full-time basis in 2000.

Ironically enough, in his final match as a full-time wrestler at *No Way Out* in February of 2000, Foley replicated his fall through the cell roof during another Hell in A Cell match against Triple H. This time, however, proper precautions were taken to ensure his safety performing the stunt.

Watch the Undertaker vs. Mankind Hell in a Cell match from King of the Ring 1998 in its entirety: 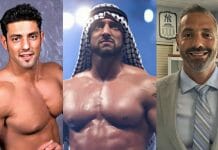 Yokozuna – 10 Stories Showing the Kind of Man He Was