Welcome to the missing ear edition here on Pro Wrestling Stories! In this installment, we will be focusing on the time when Mick Foley lost an ear in a match against Leon White (Big Van Vader) in Germany. This is not for the faint of heart. And who said wrestling was fake? Enjoy! 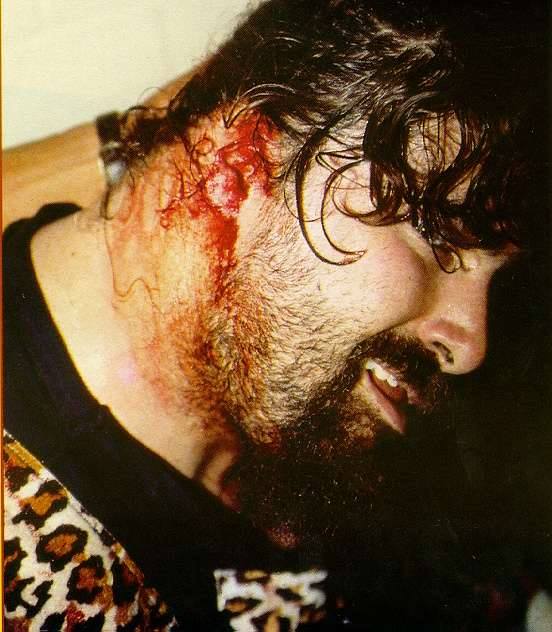 “Vader, the real-life Leon White, was in 1994 the greatest monster in the business.

Guys were terrified of him. His style was the stiffest in all wrestling.

Some of the newer guys would actually leave the arena if they saw their name on the board opposite of Vader. Other guys would hide until the evening card was drawn up, and then come out of hiding if Vader wasn’t their opponent.

Really, underneath it all, Vader was a nice, sensitive guy. I even saw him cry in the dressing room after he had paralyzed a young kid named Joe Thurman (Joe recovered the feeling below his waist a few hours later). Still, when the red light turned on, the ’94 Vader’s sensitive side seemed to turn off. He just crushed people.

He did a number on me a couple of times in the course of very dramatic matches. Not where he was trying to abuse me, but he broke my nose twice, dislocated my jaw and gave me stitches above and below the eye – all in one match.

In any other sport, a ripped-off ear would probably because for a ‘time-out’. But in our sport, the ‘fake’ sport, we have a single rule: ‘The show must go on…’

Vader and I had a history of having very rough matches, and on this night on tour in Germany – I believe it was March 14, 1993 – I came in the dressing room and said to him, ‘We’re gonna tear the house down, right!’ And he said, ‘Not tonight.’

He said he couldn’t wrestle because he had a bad arm injury. So, I took it upon myself to say, ‘Hey, don’t worry about it, I’ll do most of the work tonight…’

As part of trying to fulfill that commitment, I did the dreaded ‘Hangman’s move’, where my neck gets caught in the ropes legitimately.

On every other occasion, I’d be able to get out relatively injury free. I say ‘relatively’, because I actually had the ear stitched several times…it was a dangerous, painful move.

Earlier in the match, I had successfully caught Vader with the patented Cactus clothesline. In this move, I clothesline my opponent and let my momentum carry me over as well.

This time, I charged at Vader, who moved out of the way. I launched myself into the ropes and prepared to catch my head and neck between the second and third ropes, sail my body over, and using precise timing and my own body’s momentum, twist the second rope over the third.

Although it is a planned maneuver, it is no illusion, as the man actually is hanging by his neck.

There was no doubt about it, it was a difficult move, but even more so in WCW because they didn’t actually use ring ropes – they used elevator cables covered with a rubber casing, and when the cables were entwined, they were almost impossible to pull apart.

Unbeknownst to me, 2 Cold Scorpio had wrestled in the evening’s first match and had complained that the ring ropes were too loose…so the German roadies had tightened the cables to the maximum; there was no give on the ropes at all.

Instead of the normal pain that I had long ago accepted as a consequence of this exciting move, I felt as if my neck was in a vice.

The ropes were squeezing the sides of my neck, and I was quickly passing out…I felt like I was going to die right there in the Sporthalle in Munich.

I’m usually known as a pretty good ring general, and I had kept a calm head in some pretty bizarre conditions, but in this case, I began to do what no tough-guy, big-cheese, blood-and-guts wrestler would ever, under normal circumstances, even think of…I began screaming – and I do mean SCREAMING – for help.

I knew enough about the human anatomy to know that if the pressure continued on my carotid arteries, which run alongside the neck, I would soon pass out, and then, without exaggeration, could suffer brain damage and even death.

With that grisly knowledge in mind, I made one last effort to get myself free and wrenched my head from between the ropes.

I later likened it to a fox that chews off its paw to escape a trap.

I lay on the floor momentarily and then got to my knees. Blood was literally pouring out of my right ear.

I could hear the pitter-patter of drop after drop hitting the blue protective mats that surround the ring.

This struck me as strange…I mean, as many times as the backs of my ears had been laid wide open, they had never really bled. They are made up mostly of cartilage, after all.

I climbed into the ring and the match continued.

‘Nice juice, huh?’ I said to Vader as he set me up for a monstrous forearm to the head. I blocked his third forearm and threw a blow of my own. When this happened, a fan’s videotape clearly shows something falls off the side of my head…

Because two of our referees had been injured on the tour and had been sent home, a referee from France had been flown in. Because he spoke no English, he was unable to tell me that he had picked up a part of my body and was holding it in his hand.

He handed it to the ring announcer, who – face turning white – tiptoed the ear back to the dressing room, where he informed Ric Flair [who was the booker that night], ‘I have Cactus’s ear…where should I put it?’

Flair, being the thoughtful guy he was, arranged to have it put in a bag of ice for me.

After the match, Vader, once again showing his sensitive side – the big softy – was pretty upset about the whole thing. He even wanted to ride to the hospital with me.

I underwent a four-hour operation during which all the cartilage from the missing ear was removed and placed in a man-made pocket an inch above my remaining lobe. By doing this, the cartilage would remain vital for a reconstructive operation somewhere down the road.

After the operation, a German nurse, after disposing of the remains of my ear, turned to me and with the inquiring eyes of a child said, ‘Der catch ist alles schauspiel, ja?’ which loosely translates as, ‘Isn’t wrestling all fake?’

Welcome to my world…”

Watch the match between Mick Foley and Big Van Vader below:

SOURCE: The highly recommended book from Mick Foley: ‘Have A Nice Day’

If you liked this article on Mick Foley, check out: UNDERTAKER and MICK FOLEY Talk about Their Legendary Hell in a Cell Match 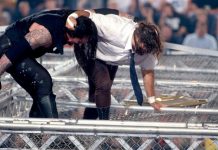 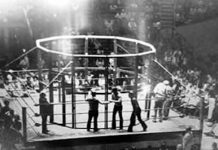 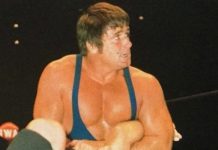 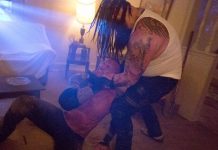 Wrestling Stipulations and Match Types That Were Never Used Again