On January 7th, 2002, Madison Square Garden was about to see one of its greatest gladiators return. Triple H had been out since a career-threatening injury on the May 21st, 2001 episode of Monday Night Raw.

A tear in his left quadriceps muscle was so bad that it came off the bone.

The injury effectively ended all momentum for his Two Man Power Trip tag team with Stone Cold Steve Austin, which was long forgotten when he returned.

But how would the people react to him? Fans hadn’t seen him in close to a year.

Triple H was about to find out.

We’ll start with the injury. For that, we rewind to May 21st of the previous year. Then, Triple H and Stone Cold Steve Austin were WWF Tag Team Champions. They put the belts up for grabs against Chris Jericho and Chris Benoit.

Triple H badly hurt himself during the match, but that wasn’t about to stop him.

Chris Jericho and Triple H spoke about this memorable night on an episode of Talk Is Jericho in 2015.

Y2J stated, “I remember thinking, ‘This is one of the toughest dudes I’ve ever been in the ring with in my life!’ because you finished that match with a torn quad, came BACK in the ring to make the save with the sledgehammer, took a Walls [of Jericho]… I mean, that was incredible, man.”

Triple H responded, “I remember you said, ‘Oh my god, are you okay?’ And I was like, ‘Absolutely not!’ I mean, I couldn’t even put weight on it, but, ‘Whatever I’ve done, I don’t think I can make it any worse,’ so ‘Put the Walls on me.'”

“The Game” continued, “When you did, I remember you turning me over and thinking, ‘REALLY bad decision!’ Like ‘Holy s***….’ I remember you putting me down on the table, and I had to go back in to do the spot. ‘Oh my god, am I going to be able to get up to the ring?’ And I was like, ‘I gotta go…'”

He made it through the match but had surgery to repair the horrendous tear and was on the bench for over eight months.

Triple H spoke about the horrifying incident on that same Talk Is Jericho interview.

“I remember rolling to the floor and just curling up in a fetal position, Vince coming out and saying, ‘What’d you do?’ and me saying, ‘I tore my quad.’

“I felt it when it went, man; it just rolled up to my hip.

This injury would have taken out most men for good.

“Here’s another thing,” Triple H related to Jericho. “I remember coming up the ramp, and as we were getting to the top, I was doing the math in my head… ‘Four months, rehab, can I be back for Mania?’

“That was my whole mentality, ’cause it was like May when I did it, but I was thinking like, ‘Man, I don’t think SummerSlam is an option, but I know I could probably come back for later…'”

“I didn’t know how bad it was,” he continued. “And I didn’t know Dr. Andrews was going to come to me with, ‘You might never wrestle again.'”

He got the surgery and went right to work with his rehabilitation. So singularly focused, the King of Kings got to the other side and bested the recovery process.

Due to this injury, however, he missed the entirety of the WCW/ECW invasion storyline. As a result, the McMahon/Helmsley era also had to be shelved.

When he was finally on track toward a return, the video packages showing his surgery and recovery pivoted The Game toward a face turn.

The pieces were coming together for his legendary return to Madison Square Garden almost eight months later.

Finally, he got there.

Months after the original injury, Triple H had worked through all the rehab and was back.

But how would it go when he stepped through the curtain again, after being away for so long?

When Triple H came out, you could feel the massive building shake.

The crowd let out an unforgettable roar of love, respect, awe, and appreciation.

This is one of the most legendary loud crowd reactions of all time.

It plays into the idea that the hotter a bad guy is, the better the good guy they’ll make. Triple H’s injury took him out while he was red hot as a villain.

You could feel the joy of the audience. It was infectious, a ride where you knew something special was happening.

It was the biggest ovation he ever received in his career and it moved him to tears.

Triple H spoke about this moment earlier on WWE’s The Bump in January 2021.

“It was great. You know, it’s hard to put into words the journey that I was on at this point in time because there was a high probability that I would never wrestle again with the injury that I had, and they let me know that. So, coming back, having the return that I did and having the opportunity to do that at Madison Square Garden, and the reaction and everything was incredible.”

“When I got back through the curtain and made sure I was out of sight, I lost it. I was bawling. Certainly not out of sadness. It was an appreciation.

“The whole ordeal was just so emotional for me—what I’d gone through, what I almost lost, the appreciation the fans showed me—it all just hit me at once and I lost it.”

WWE capitalized on it from there. The beautiful welcome back finalized his face turn.

Triple H would go on to win the Royal Rumble later that month. It all culminated in his main event of WrestleMania X-8 against Chris Jericho.

The ovation at Madison Square Garden in New York City solidified Triple H’s place as a legend in the professional wrestling business.

And his return was a magical moment that will never be forgotten. 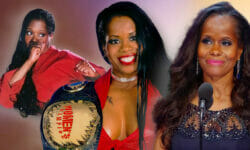