To misquote the great Bob Dylan: "This is the story of The Hurricane, a man who beat a megastar named Dwayne!"  That’s right, folks. Once upon a time, The Rock and The Hurricane had a match, with The Hurricane getting the 1-2-3 over The Rock in the middle of the ring!

This isn’t some random obscure match from Johnson’s Flex Kavana days or a bit of fun at a house show either. This was the main event of Monday Night Raw when both men were at their prime!

Our tale begins on February 24, 2003, on Monday Night Raw, where a battle royal was held to determine who would become the number one contender for Triple H’s World Heavyweight Championship at WrestleMania 19.

Booker T would win this bout (and eventually get shamefully screwed out of what was rightfully his), but it seemed another unexpected story would have its seeds sown during the multi-man matchup. Shane Helms, who played the fan-favorite role as The Hurricane, recalled on the 411 Wrestling Interviews Podcast how things spontaneously fell into place.

"It was a point [in the battle royal] where I had eliminated somebody, and then [The Rock] came over to get me, and I started firing back on him. You could feel the crowd get energized by that. I felt good about that moment, but I thought that was going to be it. Then apparently, creative and Vince McMahon just picked up on it, and they decided to roll with it.”

Watch: The seeds are sown. The Hurricane fires back on The Rock during February 24, 2003’s Battle Royal on WWE RAW

Of course, the higher-ups heard the reaction from the crowd, which led to a few pre-taped backstage vignettes between The Rock and The Hurricane, such as the one where Rocky finds Hurricane hiding behind a curtain. Well, they were SUPPOSED to be pre-taped…

"Rock did something on that pre-tape that was interesting to me,” Shane Helms explains to Chris Jericho on Talk Is Jericho.

“He kept blowing the pre-tape. He kept fluffing his lines and shit, and one time he kinda flubbed his line, and he turned at me and gave me a slight wink. He kept breaking it on purpose, so we would have to do it live.

Little did The Hurricane know this was building to potentially the biggest night of his career.

"I was in a hotel,” Helms explained, “I leave my phone in my room, and I went to get a drink from the vending machine.

“I came back to a missed call. It was The Rock saying, ‘Me and you are going to main event Monday night in Cleveland, and you’re going over. Have your bumping shoes on!’ I remember thinking this is a fucking rib."

The Night The Hurricane Beat The Rock

March 10, 2003’s Monday Night Raw began with The Rock, who was a Hollywood heel at the time, demanding a different opponent than Booker T from Eric Bischoff in that evening’s main event, using the excuse that he is 100% focused on facing Stone Cold Steve Austin at WrestleMania.

Bischoff agrees that if he can find someone else, this won’t be a problem.

Later on in the show whilst strumming his guitar backstage, The Rock’s chosen opponent walks up to The Great One… and, stand back, it is revealed to be none other than The Hurricane!

After declaring the match, a No Disqualifications match so that The Hurricane could use his "superpowers," The Rock compares Hurricane to Maccy D villain The Hamburglar before sucker-punching the emerald hero.

Of course, with an entire night to build up to this main event, an educated fan could guess it would be more than just a squash, especially with The Rock deciding to interrupt Steve Austin while he was verbally laying into Eric Bischoff. I wonder if that will come back to bite him on the ass later? (spoilers, it does).

The Rock makes his entrance, and the crowd awaits the rival of The Hurricane. As soon as his music hits, JR puts his stamp on the story to be told. "Folks, this is going to be a car wreck!"

The match starts with The Rock bullying The Hurricane. Whenever Helms builds a little momentum, The People’s Champ cuts him off. Rocky mocks the smaller competitor, putting on his cape and doing his poses whilst laying the smackdown.

But every time Hurricane starts a little hope spot, a chance of a comeback, the audience in attendance gets more and more into it, cheering on the underdog. This match is a perfect example of pure in-ring storytelling.

Then it happens. The Hurricane hits The Rock with a chokeslam! The people of Cleveland, Ohio, blew the roof off the building. The Rock manages to kick out of the pin attempt, but then the glass shatters, and Cleveland pops once again!

Austin walks to the ring allowing the distraction and for Hurricane to roll up The Great One. 1-2-3, The Hurricane wins!

Of course, this match was served a greater purpose of building up the third match between Austin and The Rock at WrestleMania 19. Hurricane didn’t even get a chance to celebrate his victory, hightailing up the ramp with a happy victory sprint… like some kind of Hamburglar.

"You can see that Austin nearly tried to grab me,” Helms reflects. “He was there when I got the direction to take off, so I did what I was told, but that was one of those things where I’m the new guy. I don’t want to piss anybody off. I just beat The Rock; I’ll take what I can get. In a perfect scenario, I should have stood behind Austin for a perfect 1-2-3 beat."

It may not have been a clean victory. Still, the reaction from the WWE Universe (simply known as "fans" at the time) shows the genuine happiness everyone had seeing Hurricane come out on top, rather than yet again being on the receiving end of a joke or a squash. It was probably the most fun underdog victory since 1-2-3 Kid defeated Razor Ramon 10 years prior.

It was a night Shane Helms would never forget, and neither did Dwayne Johnson.

Now tell me, folks, who doesn’t love a happy ending? 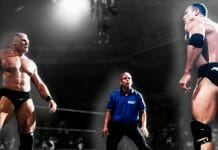 Brock Lesnar and The Rock – The Real Story of SummerSlam 2002 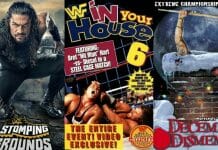 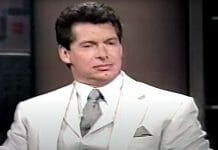