The Kliq is a backstage group of friends in WWE consisting of Shawn Michaels, Triple H, Kevin Nash, Scott Hall, and Sean Waltman. Together, they’re amongst the most influential groups of talent in the history of professional wrestling. The impact of their skills in the ring — and out — will be felt on the industry for years to come.

Over the years, they crossed paths with legends aplenty, but it was their battles with each other that helped define their careers.

Within, we take a look at three memorable times The Kliq fought amongst themselves.

THE KLIQ: Fighting Amongst Themselves

We’ll start with the most famous encounter among the bunch: the WrestleMania X ladder match to crown an undisputed Intercontinental Champion.

1. Shawn Michaels and Scott Hall – The Ladder to Greatness

In September of 1993, Shawn Michaels was suspended for testing positive for steroids (something he never admitted to). He was stripped of his Intercontinental Championship on television and sent away for a while.

Not long later, Jerry Lawler would run into some legal problems, and Shawn would sub in for Lawler at Survivor Series 1993 in a match against Bret Hart and his brothers Owen, Bruce, and Keith.

While Shawn was away, “The Bad Guy” Razor Ramon would go on to win the vacated Intercontinental title. This put the two men on a collision course toward one of the greatest WrestleMania matches of all time.

Shawn Michaels was strutting around the place, calling himself the rightful champ, carrying around the original title. That’s how we got to Shawn and Razor standing across from each other in Madison Square Garden at WrestleMania X. It was a simple story, but that’s all it needed to be. Shawn Michaels was challenging Razor Ramon’s validity as champion. They took that premise and built off it, then really delivered for the climax.

While this article is about The Kliq, we would be remiss if we didn’t mention Bret Hart’s role in this match.

"I was the one that had been trying to get Vince McMahon for years to let me have a ladder match," Bret Hart revealed on WWE’s The Bump. "Somewhere back in the months earlier, he had me do a ladder match with Shawn Michaels. I could pick anyone. I picked Shawn.

"I went to Shawn and explained what a ladder match was, and they had us put on a match in what I believe was Portland, Maine. It was a TV taping, but we had a dark match, and we did this ladder match, and it was all just to show Vince this match and what the concept was.

"Had I known at WrestleMania X that Shawn and Razor were gonna steal my ladder match idea, which they did, I never would have said something. It was just a flat out theft, and I was always kind of disappointed by that because it was my match, and I just wanted Shawn to demonstrate it."

Bret had earned acclaim for ladder matches in Stampede Wrestling, but most fans will never think of him when they think of this match type. It’s forever associated with Shawn Michaels, especially, but Razor Ramon too. WrestleMania X put the ladder match on a huge stage, and it’s been all systems go ever since then.

This one helped launch the career of The Kamikaze Kid, AKA The Cannonball Kid, AKA The Kid, AKA The 1-2-3 Kid, AKA Syxx, AKA X-Pac. We’ll stick to Sean Waltman for clarity’s sake. There is an excellent backstory to the 1-2-3 name, though.

The 1-2-3 Kid name was born on the May 17th, 1993 episode of Monday Night Raw. Waltman faced off with Razor Ramon in a match that everyone assumed was a lock for The Bad Guy.

Suddenly, The Kid got himself an upset victory and shocked the world.

It was an excellent moment that stressed how fun unpredictability could be. Not to mention, the win gave credibility to Sean Waltman in a big way. Up until that point, he was a nobody who became a somebody right in front of their eyes.

Waltman discussed this storyline’s significance on his podcast, covering the moment he was told he would beat Razor.

"I was waiting for a call because I already had all these other things going on. I was promoting my own show, this NWA show with Hawk and Terry Funk in the main event. I worked with Sabu, which was my first match with Sabu, and it kind of put us on the map with a lot of people. Jerry Lynn wrestled Candido, Taz wrestled Brad Rheingans, and there was Nailz and the Hater against Masa Saito and Charlie Norris. What I’m trying to get at is, I had a lot going on. I also had a New Japan tour for a Super Junior tournament. So I kind of had options, right? But I never thought I would get hired by WWE. I never thought they would even consider me."

Waltman continued, "I had the [WWE] tryout, and I’m at home waiting. It seemed like forever ’til they called. Then one day, I pick up the phone, and it’s Vince, and he runs this whole Razor Ramon story by me. Pat Patterson is on the line with him, and they’re laying the whole thing out exactly how it happened. I even mentioned, ‘Well, I have this Japan tour…’ and they’re like, ‘Okay, well then we’ll have Scott doing the promos,’ you know, challenging me to a rematch, putting the money up, and then eventually it’s too much for me to pass up and whatever.

"Vince asks me what I think of it, and obviously, I am blown away by the whole thing. Everyone else, when they come into WWE, they just get three weeks of vignettes and some squash matches, and you know, ‘Get over.’ So it was so much greater the way I was brought in."

Sean Waltman talked to us about being told his career in wrestling was over in November of ’92 to being on national television scoring an upset win over Razor Ramon as the 1-2-3 Kid in WWE six months later. You can learn more about this here.

"You never hit anybody harder in the ring than you hit your friends."

SummerSlam 2002. Shawn Michaels returns after four years away from WWE to battle Triple H in an unsanctioned match. Anything could go wrong. Would it? Would Shawn be able to get through an entire match? Could his back possibly hold up? What if he just wasn’t the same caliber of athlete he was before he left?

All of these questions and more swirled around this match. The atmosphere was insane. Nobody knew what to expect from this match. Of course, Shawn Michaels and Triple H went out and put on a barn burner as if Shawn hadn’t missed a day.

Throughout the match, they went at each other. They even had Triple H work Shawn’s injured back, which was in-ring psychology at its best, but it must have been terrifying. Think about being Triple H. He couldn’t have been at ease as he laid into Shawn with a sledgehammer or dropped for a backbreaker.

This was the beginning of the second stage of HBK’s career that arguably outpaces the first. There’s more consistent quality with the matches.

On the Something to Wrestling podcast, Bruce Prichard talked about the real worries WWE had about Shawn after his return.

"There were times throughout it from the second week of Shawn returning where we were thinking, ‘Okay, how long is this going to be able to last? How long are we going to be able to do this?’ So, every day, in many respects, was a gift that, ‘Okay, man, he’s going alright.’"

Prichard continued, "The more that he worked, the more he felt like, ‘Okay, I can do this a little longer.’ It’s when you stop working, you’re not working as much, and it’s harder to get back into the swing of things and get back into the groove of things."

During his second stretch with the company, Shawn was going up against wrestlers like Randy Orton, Batista, John Cena, Kurt Angle, Edge, Chris Jericho, Kane, JBL, and more. The roster was so much deeper when Michaels made his return from 2002-2010. Then, of course, there are the classic matches at WrestleMania with Undertaker and Ric Flair.

Stage two HBK faced off with the best and made them better, as opposed to stage one Shawn Michaels, who visibly took out his frustrations on an opponent not working to his standard with tantrums in the middle of the ring.

These are only but three examples of career-defining matches contested between members of The Kliq. We didn’t even mention the SummerSlam 1995 ladder match between Shawn Michaels and Razor Ramon. Then there are the many encounters that surrounded this storyline and the time in general. Razor Ramon vs. Diesel at SummerSlam 1994, where Razor had Walter Payton in his corner and Diesel had Shawn. There are many examples of these five friends facing off with each other during their careers and seeing great success because of it.

My personal favorite is Shawn Michaels vs. Diesel at “In Your House 7: Good Friends, Better Enemies.” That no disqualification match is top tier. Diesel takes Mad Dog Vachon‘s prosthetic leg and uses it on Shawn. See below:

Not all of their matches were great. An obvious example of that would be The Summer of Punk II somehow turning into Triple H vs. Kevin Nash in a sledgehammer ladder match at TLC 2011. I’m sure none of us would mind if that whole ordeal were wiped from our brains.

All in all, The Kliq left an indelible impression on the professional wrestling industry, but that wasn’t with some controversy, too. According to some, they were “toxic bullies” for a lot of their careers, using their power to cause damage to people’s careers and livelihood.

Having said that, there’s a reason The Bullet Club snatched the “Too Sweet” gesture. The Kliq changed the game. Quite literally in the case of Kevin Nash and Scott Hall with the nWo. Shawn Michaels, Triple H, Kevin Nash, Scott Hall, and Sean Waltman together share a legacy as one of the most talented and influential groups in professional wrestling history, and their mark on the business of professional wrestling will be felt forever. 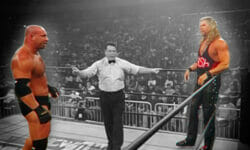