When Jeff Jarrett returned to the then-WWF in October of ’97, he was promised a feud with Steve Austin. This promise was one of the biggest deciding factors in Jarrett coming back to the company. Unfortunately for Double J, Austin completely shot down the idea of working with him, and the reasons were numerous.

Why Steve Austin Was Against Working With Jeff Jarrett

"Now here’s a guy who’s lowered himself to shaving his head and coming out here every week not once or twice but ten or fifteen times and saying the word a**," Jarrett said on his first night back.

"That’s right. Saying the word ‘a**’ just to get a reaction. Just to get noticed. Stone Cold, you will always be the Ringmaster. And as far as your blasphemous merchandise, that offends me. Austin 3:16 offends me because what you’re doing is ripping off the Bible to put money in your pockets!"

It appeared the stage was being set for a feud. The only problem for Jarrett, though, was Austin was dead set against the idea.

The promo’s content was never discussed with Steve beforehand, which made him absolutely livid when he heard it live, and when Jarrett walked back through the curtains, a furious Stone Cold awaited.

"I was instrumental in bringing Jeff Jarrett back to the WWE," Vince Russo detailed in a blog post on InsidePulse.com.

"The day of his return, I wrote an in-ring promo for Jeff, as I wrote all his in-ring promos. Jeff was just one of those guys that liked you to write his verbiage for him.

"After giving him his words, Jeff read through the promo and came back to me. Upon his return, he said everything was good, but that he was going to add one little thing.

"During his promo, he was going to add in a part about Austin’s use of 3:16 and how blasphemous Jeff felt that phrase was. He was also going to accuse Steve of using the Bible reference as a tool to strictly make money."

Russo continued, "Now, keep in mind, I had NO IDEA of the backstory and history between Steve and Jeff’s father Jerry Jarrett when Steve was a rookie making his way through the USWA territory in Memphis—I would find that out later through Steve.

"Anyway, in getting back to the story, Jeff went out and cut his promo—adding his 3:16 thoughts—and Steve was on the other side of the curtain waiting for him when he came back. Steve was freakin’ furious; I mean, his bald head was BLOOD RED.

"As soon as Jeff came to the back, Steve was verbally all over him, holding nothing back. He told Jeff that he was messin’ with his livelihood and that he didn’t appreciate that. Jeff back-peddled like I’ve never seen anyone back-peddled before or since. It was literally the heel backing off the baby—but this was not scripted."

Russo resumed, "After the explosive tongue lashing, Steve tracked me down. He gave me CLEAR instructions to NEVER book him with that S.O.B.

"Steve then went on to tell me that even though it was the 3:16 promo that set him off, that his history with the Jarrett’s went way back when, as his boss, Jerry Jarrett paid Steve so little money that he had to live on boiled potatoes when he worked under him in Memphis."

Steve Austin harbored a lot of resentment towards the Jarrett family due to the way he was treated in Memphis. While Steve could only afford potatoes, Jeff was catered to as the booker’s son. Jerry had a huge mansion in Hendersonville, Tennessee, and both of them lived a good life, while Steve was getting around on forty bucks a night.

On the sixth episode of Ric Flair’s podcast, Bruce Prichard was a guest, and the two of them talked about Austin’s time in USWA. Steve, according to Prichard, was seen backstage after a show staring in disbelief at how small his small paycheck was when Jeff Jarrett walked up, slapped him on the back, and said, "Keep on staring at it, boy. It ain’t going to make it no bigger!"

Six months after the "blasphemous" worked shoot promo, Vince Russo, thinking by now things have cooled off, pitched another storyline for Jarrett and Austin. This time, the entirety of the feud would be based around Austin randomly coming out and stunning Double J. He thought by booking it this way, Austin would get behind the idea. He was wrong.

"When we arrived at TV, Steve pulled me in a room and read me the riot act–citing everything he had told me–verbatim—six months prior. Steve hadn’t forgotten one word of our conversation—NOT ONE. After apologizing–because he was right and I was wrong—I changed the show on the spot to meet Steve’s wishes."

Instead of working the main event program with Austin to get the credibility he needed, Jarrett’s actions caused him to be denied and stuck with a stigma of not being good enough.

In an interview with the now-defunct "Get in the Ring" radio, Austin explained why he felt Jarrett wasn’t the right guy for him to wrestle in 1998. These quotes are made available through the book Mysteries of Wrestling: Solved.

"Jarrett wasn’t physical enough — he didn’t hit the ropes hard enough. And it wasn’t a case of me being able to bring him up, more a case of him bringing me down because of how hot I was. I’m not out there UFC shoot fighting, but Jesus Christ, lay some stuff in on me, bust my mouth, whatever.

"That’s the way I did it when I was feeding comebacks on DX and all those guys. I mean, guys would be walking backstage with busted lips and noses, loose teeth. I was throwing sledgehammers in there, and people were going crazy — that’s just the way it was.

"He can’t hit the ropes hard enough to bust an egg; I had a violent, physical work style. I mean, Jesus, you want to work with me, bring it!"

Austin also talked about the night Russo pitched the angle to feud with Jarrett again six months after returning.

"Then we get to the Gund Arena, and they said, ‘Okay, Steve, we want you to work a match with Jeff Jarrett.’ I said, ‘What? You want me to work with who?’ They said, ‘Jeff Jarrett.’ I said- I think Vince Russo was telling me this- I said, ‘Alright, come here.’ So we walked into McMahon’s room, it might have been me, Vince, Jim Ross, and about five other people.

Jeff Jarrett, having heard Austin’s criticisms about not hitting the ropes hard enough, countered with, "Steve Austin has drawn a ton of money but threw a very phony punch. This business is all about perception, so I really don’t understand that one, still, to this day.

"There’s a lot of things that you can pinpoint, or complain about, in Jeff Jarrett. But his in-ring work? I’ve never heard that. This statement about hitting the ropes confuses me more than him, not wanting to work with me."

Bruce Prichard, who was Vince McMahon’s right-hand man at the time, corroborated the stories above on the "Austin 1998/1999" episode of the Something to Wrestle podcast.

"There was heat with Jarrett going back to when Steve worked in Tennessee. There was professional heat there, Jeff being Jerry Jarrett’s son, payoffs, and what have you.

"To be out in public, everybody’s going to see them together. They’re taking pictures everywhere. As little private life and as little that he had to himself, he didn’t want to jeopardize that."

"Back in the day when I was working in USWA, I was working as a heel. When I first went from Dallas down to Tennessee and started working with Jeff Jarrett, Jeff Jarrett had a pretty good amount of steam going for him.

"He was a white meat babyface, he was really over, and I had some pretty good steam just as a punk-a** heel. Me and Jeff Jarrett had some bada** matches over there. We tore it up.

"But sometimes, when Jeff would have me in a headscissor, he had those kinds of long tights with the tassels on them, and those tassels were probably about six, seven, or eight inches long.

Watch: Steve Austin delivers a Stone Cold Stunner to Jeff Jarrett and mocks his strut on January 5, 1998’s episode of Raw Is War:

JP Zarka created Pro Wrestling Stories in 2015. He's a writer, editor, producer, former host of The Genius Cast podcast alongside Lanny Poffo, teacher/assistant principal, enjoys playing guitar, songwriting, and spending time with his lively daughter! Originally from Chicago, he has called London home since 2008. JP can be reached on Twitter @pws_official or by e-mail at admin@prowrestlingstories.com. You can hear his music at the YouTube link below. 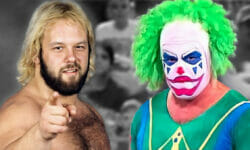