Oops, that wasn’t supposed to happen! In his second-ever appearance for the WWF in 1996, Steve Austin made quite the blunder when he accidentally eliminated himself from the Royal Rumble. He was supposed to make it to the final four. 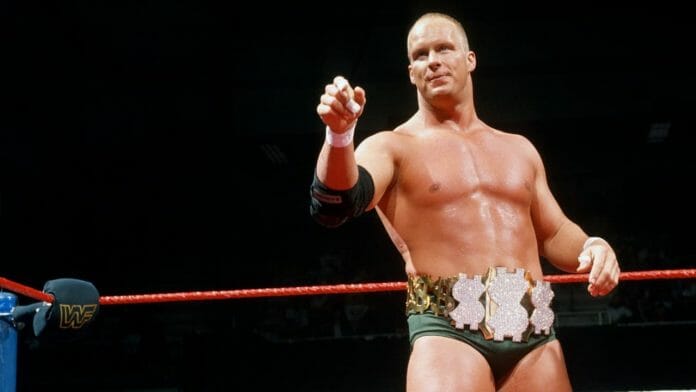 The Royal Rumble is arguably the second most important event of the year behind WrestleMania in the WWE. Plenty of eyes are attached to the screens each year as the Royal Rumble plays out. The Rumble match itself is such a marquee event that stars can be made even if they don’t win, just through their sheer effort and performance.

Stone Cold Steve Austin, one of the biggest stars the industry has ever seen, made his first pay-per-view appearance at the 1996 Royal Rumble match. Then going as "The Ringmaster," Steve was very early into his WWE (then-WWF) run, and The Royal Rumble was a huge opportunity to get his character out there and make the audience more accustomed to him.

The Rumble was only Steve’s second televised match in the WWE, having made his victorious in-ring debut on RAW a week before the pay-per-view against Matt Hardy. The Ringmaster was in line for a push, and the Royal Rumble was the perfect event to kickstart it.

Making the final four out of thirty superstars is no easy feat, but that was the opportunity the WWE newcomer had planned coming his way. This had to be exciting news to Steve Austin, being told that he would come close to winning the Royal Rumble in his first month with the company. It was a huge effort, an effort that would cement himself as a big-time player right off the bat — except, Austin didn’t finish in a respectable fourth spot like he was supposed to. He was eliminated several spots before that.

Fatu [Rikishi] had some baby oil on, as many of the wrestlers used to do. He charged at Austin with a clothesline with a little too much force, and Steve toppled over the top rope and fell to the floor. He wasn’t able to hang on.

Trivia: WWE banned the use of baby oil at events in 2014. The reason for the ban is apparently because it doesn’t look good on HDTV.

Vince McMahon was on commentary alongside Mr. Perfect, and he didn’t appear to be enthused by the accidental elimination. Vince didn’t acknowledge that The Ringmaster had been eliminated by Fatu and wanted to ignore it until Mr. Perfect mentioned it, leaving Vince with no real choice but to respond.

"What happened to The Ringmaster?" Mr. Perfect asked Vince on commentary.

An unpleased Vince responded, "I’m not certain; he must have been eliminated. We missed it."

Both commentators quickly moved on, not making mention of it again.

Steve Austin – Looking Back on the Incident

Steve Austin is a class act when he looks back on the incident. He could easily blame Fatu for going a bit too hard with the clothesline but doesn’t do so. Austin went over the elimination gone wrong on his podcast, The Steve Austin Show.

"We were at the Royal Rumble, I think it was the second Rumble I was ever in, it might have been my first, as a matter of fact, and I was supposed to be finishing fourth in the match. So, your first year in the company, and you’re gonna be the fourth-to-last guy left in the ring, that’s a pretty good rub. You’ve weathered the storm from thirty WWF superstars, and now you’re number four and going down to three, two, one, whoever wins that gets the big push.

"So anyway, I was doing a spot with, I believe it was Fatu, I can’t remember, one of the Samoans… And man, he had a lot of baby oil on. All the guys were oiled up, and so the ropes were very slippery.

Austin continued, “I was going to do a deal where he does something to me, and I was going to take a bump over the top, hang onto the top rope, come back in the bottom — well, zip zip, boom, I lost my grip, fell out on my keister down by the guardrail and I was thinking, ‘Oh man, I’m the new guy in the company, they’re trying to give me a little bit of a push here by letting me be the fourth-to-last guy in the damn squared circle with three other badass superstars, and I blow it. Really!?’"

Stone Cold continues to explain how this affected the other superstars in the ring.

"So I’m sitting there out on my ass, and Shawn [Michaels], I believe Shawn was going over (planned to win) in that Royal Rumble, or he was an integral part of the finish, so you know, what I’ve gotta do is… This is live. This is at the San Diego Sports Arena, 20,000 people there, it’s on pay-per-view. I gotta let [Shawn] know, ‘Dude, everything that I had to do to help you with the finish of the match… I’m gone!’

“So anyway, I’m sitting down on my ass and Shawn Michaels, one of the great in-ring performers in the history of the business — he can make chicken salad out of anything — as I’m on the floor, I get up, and I make eye contact with Shawn. I just kind of held up my hands, I mean in a kayfabe style, not just saying, ‘Hey, I got dumped on my ass, here’s the signal, you must do something and overcome this tragedy!’…  I just gave him the visual cue like, ‘Dude, I’m out, I screwed up.’

“I don’t know how Shawn fixed that, but sometimes things happen that you can’t control and the rest of the guys just gotta go on the fly, and that’s when one guy will step up, and he’ll be that ring general and come up with a general plan that’s copacetic."

While it all turned out well in the end for that match and Steve, he was never a fan of The Ringmaster gimmick. He wanted a change, and that’s exactly what he got. Making the transition from The Ringmaster to Stone Cold Steve Austin was instrumental to his success, and he went on to win his next Royal Rumble in 1997, again in 1998, and a record third time in 2001.

Stone Cold’s WWE career didn’t begin the way he had envisioned with the accidental elimination, but it certainly didn’t hurt him going forward. From The Ringmaster to someone who generated millions of dollars for the company, it really was a remarkable transition.

Watch Steve Austin accidentally get eliminated from the 1996 Royal Rumble: