Eric Bischoff is the second most successful wrestling promoter in history. No one other than Easy-E has ever come close to putting Vince McMahon and the mighty WWE out of business.

Bischoff led WCW to become the most dominant brand in sports entertainment. For 83 straight weeks, Nitro, under Bischoff’s creative guidance, defeated Raw in the ratings. That is incredible, and something that will likely never happen again.

Eric deserves immense credit for that, but unfortunately, he is often seen as a lucky guy who was given Ted Turner’s blank checkbook, which enabled him to sign away all of WWE’s top talent. That is a ridiculous notion. But that’s a story for another day.

This time we are speaking about a certain someone really close to joining WCW during the Monday Night Wars, and if this person had left WWE, we would perhaps be tuning into Nitro every Monday night instead of WWE’s flagship show, Monday Night Raw.

Did Eric Bischoff Try to Sign the Undertaker to WCW?

First, let’s squash and destroy all those lingering rumors of marquee signings from WWE that everyone thought WCW was close to getting. Case in point: the Undertaker. Mr. WWE, in many ways.

He has been the heart and soul of that company since before many fans of the business were even born. He is a legendary, iconic figure. So it would only be natural if Eric saw him as a great signing for WCW.

WWE Hall of Famer Kevin Nash was certain Undertaker was about to join him in Atlanta. "We had ‘Taker close," said Nash in an interview with Sports Illustrated’s Extra Mustard.

"All of a sudden, he wasn’t the Deadman. He became the American Badass for a reason. That Deadman wasn’t going to fuckin’ come to WCW! He would have been the biker character and gone by Mark Calaway.”

But on Ric Flair’s Wooooo! Nation podcast, Eric Bischoff clarified those rumors once and for all. "See, that’s another one of those internet wrestling rumors that continues to survive, what is it now, 18, 19 years later? Nothing could be further from the truth," he said.

"There was never one syllable of conversation between anybody that mattered," he illustrated. "Maybe some of the lower-level guys on the production, maybe some freelancers said, ‘Wow, wouldn’t it be cool if the Undertaker came over?’

"Or maybe there was some new assignees over at the Power Plant, where some other people that really weren’t very significant who had some indirect association with the company speculated about how cool it would be. There was never any meaningful conversation with anybody that mattered at any level."

So there you have it. Bischoff never once entertained the notion of signing Undertaker to a WCW contract. It is a strange one considering how iconic The Deadman was even back in the late ’90s. Maybe Bischoff felt Taker was so loyal to Vince McMahon that he would waste his time even enquiring. So we were never close to seeing Undertaker take on Sting after all.

Another big name from WWE that everyone still believes WCW was close to signing was “The Heartbreak” Kid Shawn Michaels, but again, this is far from the truth. “It’s not that his name didn’t come up; I knew of Shawn.” Bischoff added, “I was always under the impression that he was happy where he was, and he just felt comfortable working for WWE and that he was never really interested in coming over.”

Like Undertaker, Bischoff felt Michaels was too loyal to WWE ever to contemplate leaving them, even if it meant joining his buddies Nash and Scott Hall in Atlanta. Michaels did try and force a move out of WWE in early ’97, but many believe this was just a tactic to get a bigger contract, which worked.

Who Did Eric Bischoff Almost Sign Away from the WWE?

So, who was this mystery person Eric Bischoff almost signed away from the mighty WWE to join forces with WCW? It was none other than Pat Patterson, the wrestling creative genius responsible for creating the Royal Rumble match, and coming up with finishes for some of the biggest matches in history,  Stone Cold Steve Austin, Bret Hart, The Rock, Undertaker, and more.

On Sam Roberts’ podcast, Bischoff admitted, “The only person [behind the scenes] I tried [to sign] was Pat Patterson. People kept telling me what a great finish guy he was, and I knew looking at our product; we needed someone with that depth of storytelling.”

And just how close did they come to hashing out an agreement?

Very close if you believe several respected sources in the business. Patterson was said to be frustrated with things in WWE at the time and was looking to leave the business, which is when the offer from WCW came in.

According to Arn Anderson and Gerald Brisco, Patterson had several meetings with WCW chiefs and was seriously contemplating joining the Atlanta-based promotion. However, once he let Vince McMahon know of his plans, Vince panicked and caved to Pat’s demands to keep him on board.

Who knows what would have happened had Pat Patterson joined WCW? We definitely wouldn’t have got some of the shoddy finishes we saw in WCW during its dying days, that’s for sure. But it is an interesting story, nonetheless.

Hulk Hogan, Kevin Nash, and the Fingerpoke of Doom! 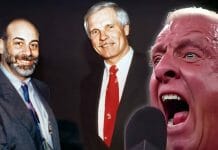 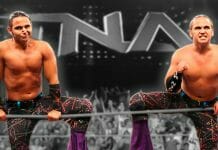 The Young Bucks in the Impact! Zone – How TNA Let Them Slip Away