In October 1999, WCW would sign the two men looked at as the creative force behind WWE’s Attitude Era: Vince Russo and Ed Ferrara. The hopes were that the pair could work the same magic that they had done for Vince McMahon. But was the magic real, or was it all just smoke and mirrors?

“Help… We need somebody!” – Vince Russo and Ed Ferrara in WCW

Let us set the scene. At the end of 1999, Eric Bischoff and WCW were failing to capitalize on its incredible roster of cruiserweights and mid-card talents such as Chris Jericho, Eddie Guerrero, Booker T, and Rey Mysterio Jr. Instead, fans were given main event matches featuring Hulk Hogan, Ric Flair, and Kevin Nash for the zillionth time.

Meanwhile, the then-World Wrestling Federation was as hot as they ever were thanks to talents such as Steve Austin, The Rock, The Undertaker, and the rest of the Attitude Era roster.

After many money-wasting months, on September 10th, 1999, Eric Bischoff was removed from power. Despite being a key player in turning WCW from a southern rasslin’ promotion into a global powerhouse, Turner Sports Executive Harvey Schiller replaced Bischoff with former Turner accountant Bill Busch.

Busch was smart enough to realize he didn’t know much about wrestling and was more of a money man anyway, so he put TV producer Craig Leathers in charge.

The creative team was now full of men who had already been part of the creative that put WCW in their current position: Kevin Nash, Dusty Rhodes, and Kevin Sullivan.

Despite the changes, WCW was still not doing well, so Busch took a page out of Bischoff’s playbook and signed two men from WWE.

While Bischoff’s two signings were Scott Hall and Kevin Nash, Busch’s targets were not wrestlers but two men who were looked at as the creative force behind WWE’s Attitude Era: Vince Russo and Ed Ferrara.

Two Writers – Can They Save WCW?

In 1997, the WWF (now WWE) was a company needing some help. It was pretty much the same position WCW was in two years later. And while they had plenty of talent, the creative in WWE was not doing anything catching fans’ eyes away from the nWo storyline WCW was using. So, WWE decided to put the creative storylines in the hands of a magazine writer by the name of Vince Russo. Could he help the company?

By 1998, with Russo’s brand of edgy storyline that would become known as "CRASH TV" mixed with Austin, The Rock, and DX, WWE started to pick up steam.

By 1999, with WWE now firmly on top of the wrestling world, WWE’s red hot streak had caused Vince Russo and Ed Ferrara to feel burnt out and no longer feeling the challenge that was there before.

As Russo wasn’t signed to a WWE contract, he decided to meet with WCW officials on the possibility of jumping ship. WCW was determined to get the man who was looked at as the sole reason for WWE’s success.

“They paraded everybody in there,” said Russo on the Ultimate Insiders DVD. “You talk about a horse and pony show. I knew they were not gonna let me leave Atlanta without signing a contract.”

When Vince Russo called Ed Ferrara to let him know what he was going to do, Ferrara knew this would be bad for him.

On October 3rd, 1999, Vince Russo and Ed Ferrara signed to WCW. The pair were put in creative control of a company that seemed ready to get back on top.

Hope Arrives in the Form of Vince Russo and Ed Ferrera

On October 18th, 1999, Vince Russo and Ed Ferrara began their work of making WCW great again, and they had a straightforward method to cure the ailing promotion. The formula consisted of three things:

The first WCW Nitro under the Vince Russo and Ed Ferrera regime had Madusa facing Mona in an evening gown match, The Filthy Animals (Konnan, Rey Mysterio Jr, Billy Kidman, and Eddie Guerrero) beating up and stealing from Ric Flair, and Buff Bagwell laying down for LA Parka before grabbing a headset to ask: "Russo, did I do a good job for you? Who else do you want to beat me?" before being smashed over the head with a guitar by the surprising return of Jeff Jarrett.

When the ratings came in, WCW Nitro went from 0.7 to 3.30, which gave many behind-the-scenes the feeling that the Vince Russo and Ed Ferrara philosophy was working.

November and December ’99 would be the first full months under Vince Russo and Ed Ferrara. It was a time that showed everyone their true vision of WCW.

"Russo was the worst. He didn’t know what the hell he was doing," said Bam Bam Bigelow in the recommended book The Death Of WCW.

Eddie Guerrero, in his autobiography, wrote, "I don’t know how [Russo] flim-flammed WCW by saying, ‘HEY, I’m the guy who made Vince McMahon! You have to hire me, I need to run your company!’ For whatever reason, [Vince Russo and Ed Ferrera] were total marks for a pole match.”

As for Jerry Jarrett, he wasn’t so guarded with his thoughts, either. "[It was] horrible hodgepodge. The shows had no form and I could not follow anything as far as storylines. It was like reading a book by someone on LSD!"

Many people in WCW were starting to see what they wished they could have seen in WWE, and that was, while Vince Russo and Ed Ferrara could come up with great ideas, it was Vince McMahon that would choose what to use, and in WCW, there was no filter for anything Russo and Ferrara wrote.

After just two months, Vince Russo and Ed Ferrara were confident in their direction of the company and were ready for many more months to follow.

They would never get the chance.

The Powers That Be… Gone

In many ways, Bret Hart’s retirement ended the Vince Russo and Ed Ferrara regime in WCW because Bret Hart could not wrestle at Souled Out 2000.

Russo pitched an idea for Souled Out that would ultimately end his and Ferrara’s run of power.

Russo’s idea was simple, they would have a battle royal to determine the new WCW Champion. It would end with Chris Benoit winning… NOPE… Jeff Jarrett winning… NOPE…Tank Abbot winning… YES!

Russo’s idea was that shoot fighter Tank Abbott would win the WCW Championship, despite the fans not connecting with him.

Despite Tank not being very good at anything wrestling-related, it was the straw that finally broke the camel’s back, and Bill Busch stepped in.

Bill Busch told Vince Russo and Ed Ferrara that the Tank Abbott plan would not be going forward. They would need to join a booking committee consisting of Kevin Nash, Terry Taylor, JJ Dillon, and Kevin Sullivan to come up with something better.

Russo was entirely against this and went home while Ferrara decided to stay due to moving his entire family to Atlanta.

After just three months, the powers that be were gone from power in WCW.

While Russo would eventually return in April 2000, the question remains: Would WCW have become better had more time been given to Vince Russo and Ed Ferrara’s vision? Let us know your thoughts via our Facebook or Twitter page! 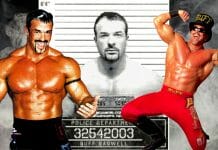 Buff Bagwell – A Tumultuous Life in and Out of the Ring