Dubbed as one of the greatest feuds of the PG Era CM Punk and Jeff Hardy had an outstanding rivalry culminating in the summer of 2009. Their feud holds up today as one of the greatest of the last decade and beyond. What made it so great was the reality behind it. This wasn’t some common “oh, I don’t like you very much” feud. This was anything but generic. The story wrote itself. Here we had CM Punk, a man who truly believed in the straight edge lifestyle and was absolutely anti-drugs and alcohol.  On the other hand, we had Jeff Hardy, a man who faced his demons throughout his life and dealt with them in certain ways – ways in which CM Punk strongly despised. All you need to see is the transcript of CM Punk’s promos, in particular, to see how real of an issue this was. This was so much more than just a storyline. which was why the crowd was so invested whenever these two charismatic stars were on screen together.

On the 1st of July, 2009 edition of SmackDown, CM Punk had these strong strong words to say to Jeff Hardy:

“I wanna show you something, Jeff.

This is Polymyxin B Sulfate. I have to apply this to my eye three times a day. The only way you obtain this is with a prescription from a doctor. Now, I know you know a thing or two about prescription medication. What I don’t think you realize is that you have to go to a doctor to legally obtain some. Unlike you, Jeff, this is the only foreign substance I will allow in my body. So, if you wanna imitate me, why don’t you try living a clean lifestyle? Why don’t you try living a straight edge lifestyle?

The look of pure disgust on Jeff Hardy’s face and shrugging of the shoulders as he listened to all of this was captivating television, and you really felt that he did not appreciate CM Punk laying out his problems to the world like that.

Related: A Brawl Among WWE Champions

Fast forward to a few weeks later, CM Punk continued to be relentless, this time largely insulting the audience while ever so obviously making it about Jeff Hardy at the same time. Punk’s delivery is of a world-class standard, and material like this generated an incredible amount of heat simply because of how blunt and real he was about it.

“I tried, I tried so very hard to empathize with all of your weaknesses. I implored every single one of you to just say, ‘No.’ And all my empathy got was for you to love Jeff Hardy that much more than you already did. But this will not deter me. I will stay the course. I still believe in teaching you people the difference between right and wrong.

Oh, obviously it’s gonna be challenging listening to you people, and by the looks of some of you, it’s gonna be a big challenge. But, just like any other challenge that’s come down the pipe in my lifetime, I’m gonna meet that challenge head on like a man.

See, now I know why you people love Jeff Hardy so much. It’s because you are all just like him. And in turn, Jeff Hardy is just like all of you. The reality is, none of you have the strength to be straight edge. You gravitate towards Jeff because it’s the easy way out. It’s easier to be weak like Jeff because you sure can’t be strong like me. And you can boo all you want. I know why you boo, you know why you boo: Because I tell the truth – and the truth sometimes hurts, doesn’t it?

For instance, what does it say on your prescription bottle of pills? Take one every four hours? Oh, don’t tell me that you people don’t gobble four, six, eight at a time like they were Pez. That is drug abuse! I don’t do that. I also don’t smoke – and those who do are stupid! You gotta be stupid to not listen to the Surgeon General, especially when he prints the warning label on the package of smokes. You gotta be a fool.

“Now we can talk about those funny cigarettes. And you obviously know what I am talking about, because you cheer, and that is utterly sad. That’s pathetic! I can’t even wrap my head around you people cheering, cause when you smoke those funny cigarettes, it’s not only hazardous to your health, it’s also illegal. So those who have taken a puff, not only are you poisoning yourself, you’re also breaking the law. So the vast majority of everybody here in the arena is criminal. I am not a criminal, I have never been and I never will be.

Now let’s talk about alcohol. I saved the best poison for last, see, because this is a gateway drug. Don’t tell me, not a single one of you in here has ever said: ‘I’m gonna go out for one drink.’ And one leads to two. And two drinks lead to three. And then it’s a double of this and a shot of that. And then your head winds up in the toilet, night in and night out. Congratulations: That is alcoholism! In my book, if you even take one drink, you’re an alcoholic. So I understand why you people love Jeff Hardy so much. I understand why Jeff loves you. It’s because you’re all weak.

Whether you like it or not, whether you know it or not, you deserve better. This entire world deserves better. What you need is a leader. You need a strong leader who’s gonna stand up in the face of adversity and just say ‘No!’ You need a strong leader that’s gonna carry the banner of the World Heavyweight Championship with honor, with pride, respect, dignity, integrity and class. What you people need is a straight edge World Heavyweight Champion. What you need is CM Punk.”

Their feud would last until the Smackdown after SummerSlam, ultimately being Jeff Hardy’s last match in WWE until his incredible return at last year’s WrestleMania.

If for one second you thought this was all just business, think again. About a year after he left WWE, an infamous video emerged in 2010 of Jeff Hardy along with his brother Matt offering their thoughts on the straight edge superstar. It’s safe to say their feud was just as real as portrayed on TV.

“What the hell does straight edge mean again? The first ever straight edge World Heavyweight Champion… I think Christian said it best… CM Punk, I think you’re a nerd. I’ll get cocky every now and then, I’ll say ‘you paid to see me, you paid to see me’ but I made CM Punk a motherfuckin’ superstar, and that’s a fact, Jack. And I’ll end it like this, BAM!” [raises both middle fingers]

“You can’t even do that shit in your company anymore, but in this world, we can do it all we want to. You should follow me, you should listen to my preaching because this is gonna get you through life, it’ll make you live life the right way. CM Punk, your way’s not the right way, brother… That’s what’s cool about planet Earth, we’re all different. If we were all like you, man, I would rather live on Pluto. You, my friend, are way too cocky, inside and outside the ring.”

Hardy’s rant got more slurred as it continued, but he went on talk about how legends like Undertaker and other unnamed stars come up to him and ask him how he’s doing, but Punk would just walk on by to the showers not saying a word.

“CM Punk is crazy talented. We don’t stay in touch or have contact, but I have nothing bad to say about the guy… We’re just different.”

As time always does, it healed those wounds.

CM Punk-Jeff Hardy was an incredible feud which marked the beginning of Punk’s huge heel run which led him to one of the most famous promos in the history of the business, the ‘pipebomb’ promo. This was also the beginning of an 8-year Jeff Hardy hiatus from WWE. Luckily we have the WWE Network and can look back on these moments in their entirety. And who knows. Maybe these two will one day meet again in the squared circle. As we have learned through the years of following the crazy world of professional wrestling, you can never say never! 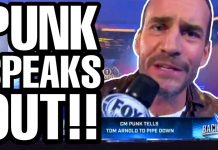 The Shield – Original Plans Did Not Include Roman Reigns

A Brawl Among WWE Champions