Drug testing is sure to happen on any day in WWE without prior notice. However, there was one time a corrupt drug administrator unexpectedly helped Sean Waltman and others beat the test.

In a November 26, 2005 interview with PWTorch, Sean Waltman opened up about his past drug use and how he and other wrestlers beat WWE drug testing via an unexpected assist from a corrupt administrator.

“When I came [into the WWF], I wasn’t using steroids, and I never really had at the time. I tried once or twice, but the truth is, I don’t even know if I had real steroids back then. I never touched a steroid until I was 25 years old until I left Vince McMahon.

“Before I went to the WWF, I had never really taken a pain-killer or any pills.

“I walked into a company that was full of people who were taking tons of pills and drinking tons of alcohol on a nightly basis. I got caught up in that whirlwind really quick. We weren’t allowed to smoke a joint. They were testing for illegal drugs, and marijuana was an illegal drug in most states. So that was the big thing. We weren’t allowed to smoke a joint. If they had only allowed us to smoke pot, we wouldn’t be taking all of these pills and getting fucked up and getting drunk every night.

“If WWE had only allowed us to smoke pot, we wouldn’t be taking all of these pills and getting f***ed up and getting drunk every night.”

“Although the sad part about it is, they were testing for certain things, when all the while, you can have a prescription for Valium, Xanax, Percocet, Oxycontin – whatever you can get your doctor to prescribe for you.

“There was a doctor Mario DiPasquale. He was a very, very good match. He was very knowledgeable in all of these things. He was probably, in my opinion, one of the top two or three most knowledgeable people about performance-enhancing drugs — and how to beat the tests, by the way.

“He was great at it. He really was. He was great at his job. He was very understanding to us because he was an athlete himself. He understood what we were going through. But at the same time, we could show up one day, take a test, and then think we would be okay for a couple of days, and bam, the next day, he’d hit us with another one. It wasn’t just where you walk in, they give you a cup, you go into the bathroom, and you piss in a cup. The bathroom you go into to piss in, there’s a guy standing there. We call him the cock-watcher. They watched the stream of urine leave your genitalia and go into the cup.

“I couldn’t think of a way to beat the test. I mean, not very many drug testing policies require somebody to actually watch it come out of you. Even when I was in rehab, you could go and have some privacy while you were taking the test.

“Now they’ve come up with prosthetic penises that look like real penises that have a real heating system in them to heat the clean urine that you would put in there to body temperature. They’ll test the temperature and the PH to be sure that you’re not using some kind of a masking agent. I’m sure in Vince’s test that there’s a thing to detect that.”

Should Vince McMahon Allow Marijuana Use in the WWE?

In regards to marijuana, Sean Waltman opened up about how it was really popular amongst some of the wrestlers in the ’90s, despite WWE not allowing their wrestlers to smoke it.

“We really liked to smoke our pot back then. It was a big deal because they wouldn’t let us do that. I felt strongly about it. I don’t know if marijuana is on his list of things he’s testing for. If I were him, I wouldn’t test for it. It’s a hell of a lot more benign than alcohol, and we’re not talking about a PR thing where we’re worried about somebody getting caught with a dime bag of pot going through the airport or getting stopped on the road, this is a thing to save people’s lives. This policy to save people’s lives, it shouldn’t be strictly for the PR of the company.

“I really don’t think there is going to be any bad press on the company if one of Vince’s WWE superstars gets caught with a bag of pot. And that’s my opinion on it. It might be a biased opinion because I’m a legalization of marijuana advocate. And I do have, in the state of California, a medical marijuana permit. If I was working for Vince, I’m sure that would exempt me from being tested for marijuana anyhow. But not everybody lives in the state of California, and not everybody’s able to get a doctor’s note, either. It’s just not the thing I’d be testing for.

“There was one time we beat the test.

“It was the Royal Rumble of 1995. It was in Tampa. We started figuring out in our drug addict minds that, okay, they test at house shows, but they don’t test us at TVs because there’s too much going on at TVs. Same for pay-per-views. And they don’t test us in non-English-speaking countries, so if we go to Europe, we can get away with smoking a joint.

“So we went out the night before Royal Rumble to Ybor City in Tampa.

“I remember Scott Hall and I leaning on each other, walking down 7th Street in Ybor City and bumping into Lawrence Taylor of all people. (The next day was when Lawrence Taylor did the angle with Bam Bam Bigelow leading to WrestleMania.)

“We’re dirty because we smoked pot the night before. We’re like, oh shit! So guys were going in and taking the test. I was avoiding it all day long.

“This guy actually couldn’t piss for everybody, but I think he pretty much took a couple of hundred bucks from several people in the company and ended up dumping their samples out. That was the only time that I could tell you that that test was beatable. It was because of a corrupt person who was administering the tests!” 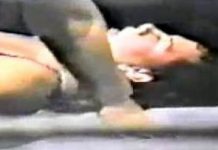 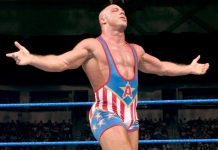 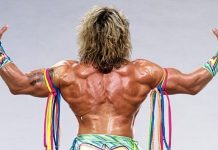 Steroids: Legal Loophole Wrestlers Used to Take to Obtain Them 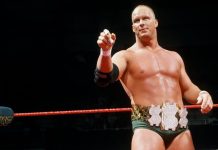 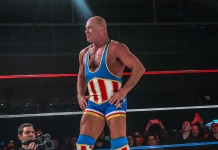 Kurt Angle – Using His Past Struggles to Help Others

Ribs and Practical Jokes in Professional Wrestling – The Best Stories