In the leadup to WrestleMania 26, John Cena, Kofi Kingston, and Chris Jericho were sharing a ride with Vince McMahon on his private jet. Drinks were flowing for the entirety of the four-hour journey when McMahon made an unfair comment to Kofi. A real-life scuffle between the two on the airport tarmac would ensue from there.

In his third autobiography entitled, The Best In The World: At What I Have No Idea, Chris Jericho opened up about what happened after Vince McMahon made some disparaging comments to Kofi Kingston after a 4-hour Jack Daniels-infused private jet journey:

"WrestleMania was going to be held on March 28, 2010, in the University of Phoenix Stadium in Glendale, Arizona, with a quadruple main event of Vince vs. Bret Hart, Cena vs. Batista, Michaels vs. Undertaker II, and Jericho vs. Edge.

It was slated to be one of the biggest Manias ever, and a few weeks before the show, I was asked to fly on Vince’s private jet from Raw in Nashville to Phoenix for a press conference.

It was about a four-hour flight, and Vince, John Cena, Kofi Kingston, John Laurinaitis, and I passed the time by playing cards, listening to AC/DC and The Rolling Stones (of course), and drinking straight Jack Daniel’s.

After the confrontation with HBK in France, I no longer drank brown alcohol, as Jack and Jericho still didn’t get along. But I was hanging with the boss, and there wasn’t anything else on the plane, so I indulged.

Bad idea because after four hours of being on the same aircraft, Jack kicked Jericho’s ass. I was completely shitfaced (all of us were) when the plane landed, and I was in a nasty mood. Drunkicho was back, and he was pissed — literally.

The plane pulled up on the tarmac, and we stayed aboard for a few extra minutes to finish up our drinks. Kofi got up to leave, and Vince made some sort of a jokey comment along the lines of "Maybe you’ll get over one of these days."

I thought it was an unfair remark and caught up to Kofi on the runway.

"You have to go back on the plane and challenge him to a fight right now. If you don’t, he’ll know he can walk all over you whenever he wants. If you go challenge him, he’ll love it and respect you for it."

I wasn’t ribbing Kofi. I legitimately meant what I said and wanted to see him stand up for himself. To his credit, he only thought about it for a few seconds before marching back up the steps of the jet. I followed closely behind.

"How’s your dad?" Vince asked me as I got to the top of the stairs. "Tell him to give me a call! I really like that guy and would love to chat with him again!" They’d met once.

Kofi piped up and said with some big-boy bass in his voice, "Vince, do you have a problem with me?"

Vince looked at him in surprise as Kofi repeated the question.

"Maybe I do," Vince replied. "Do you wanna do something about it?"

Kofi swallowed hard, knowing he’d gone too far to turn back now. "Do you want me to do something about it?"

"Do you want to do something about it?" Vince repeated as he looked seriously into Kofi’s eyes from his chair.

"Do YOU want me to do something about it?"

"Do YOU want to do something—" Vince double-legged Kofi mid-sentence. They scuffled and rolled around in the aisle for a few seconds until Vince got up laughing.

"That’s the way to do it!" he belly laughed and got off the plane.

Kofi looked at me for justification, and I gave him a big thumbs-up.

I’m not sure if he gained Vince’s respect that night, but he sure gained mine."

Kofi Kingston Looks Back on His Fight with Vince McMahon, Ten Years Later

"It’s one of my vivid memories in sports because it’s the wild world of wrestling. You know what I mean?" Kingston told Fightful back in April 2020, ten years after his scuffle with the boss. "We were on the way to a press conference.

"As we were getting off, Vince started trying me a little bit. He’s like, ‘You wanna fight an old man?’ I’m like, ‘Whoa, what is going on? What’s happening?’

"I got kicked off the plane because I wouldn’t fight him. ‘Uhhhh, okay.’

"Jericho did come down, and he said I had to go back up there because, in this weird world of wrestling, this is how you had to get respect. I’m like, ‘Uhhh, okay, I guess I’ll go up there and try to fight my boss.’

"We get up there, and we start going back and forth. All of a sudden, I got double legged on the plane. I’m like, ‘Oh my God, we’re really fighting.’ This is crazy."

At the time, Vince McMahon was 64, while Kofi Kingston was a fledgling 28-year-old.

Kofi continued, "I had the Whizzer in. The ref probably wouldn’t have given him the two points. But you’ve got to keep in mind, the aisle in the plane was three or four feet long.

"All of a sudden, he started laughing, ‘Ah, if I’d have known that you want it.’ I’m thankful that Jericho told me to go back on there because who knows, in this weird world of wrestling, if I don’t go on there, all of a sudden, ‘he doesn’t have what it takes.’

"Anyone who is an amateur wrestling aficionado, if you have that Whizzer in, they can’t award control. Who knows what would have happened. I’m pretty sure I might have been able to get my legs out and get a sprawl on. It didn’t have to go that far. I don’t think it was about the actual takedown. Who knows.

"Obviously, Vince is the one making those decisions at the end of the day. I’ve taken a lot of pride in being able to deliver over the years and maximize the opportunities I’ve been given. I’m always thankful to Vince for giving me those opportunities for the past decade-plus. I just keep trying to knock them out of the park every single time."

Fortunately for Kofi, everything worked out just fine for him in the long run. 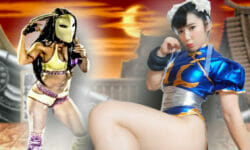