Debauchery, cross-dressing, and women. This story encapsulates the legend that is Ric Flair!

"Ric Flair was wild! He was out there, man."

In an interview with MidAtlanticGateway.net, the late-great Blackjack Mulligan (who was never short of great stories himself) shared some memories on the crazy and wild things he and Ric Flair got up to. For a period, they lived next door to one another and traveled many miles down the road together, getting into all sorts of trouble in the process!

"Me and that cat did it all…

"I stayed with him for as long as I could — until I couldn’t take any more. He almost killed me!

"We usually had our own plane. And if we didn’t have our own plane, we would go find a plane. (laughs) It could be Las Vegas one night, and it could be Richmond the next night. I have so many stories about that idiot…that maniac!

"I woke up one night in the Sheraton Hotel – Ric and I are butt-assed naked, and he’s in one end, and I’m in the other, and there are bodies lying all over. I don’t remember what happened that night… (laughs)

"We started off living next door to each other.

"This guy used to be in my backyard all the time.

"He broke my son Barry [Windham] in. One day I can’t find Barry. This was right after Ric bought this old black Cadillac limousine from the Tams – the old singing group.

"They had this old black limo they had when they were on top – Ric goes and buys it!

"He has Barry dressed up in a Chauffeur’s uniform, and has Barry drive him in that limo to the airport! My kid is 15 years old, with no driver’s license. Ric’s picking up some girl at the airport, trying to impress her.

"One night, Ric and I were at the Hilton in Raleigh. I talked Ric into dressing up like a girl… (laughs)

"Flair comes into the bar…we’re pulling a rib on a little buddy of ours who we loved, named ‘Dynamite’ Jack Evans. He was a good little worker there, a little Puerto Rican/Jewish boy from New York. One of the funniest people on earth! Anyway, he was always with one of us. He was our side guy; he did the driving for us and the dirty work. He kept his mouth shut, and he never told any stories out of school.

"[Anyway] I told Dynamite Jack, I said, ‘I got me a new girlfriend.’ And he said, ‘Really, Jack?’ Now keep in mind, Dynamite Jack couldn’t see too well. He had these big thick glasses.

(laughing) "So, I talk Flair into dressing up like a girl. He puts this wig and this dress on, and he comes on into the bar at the Hilton there. And Flair’s sitting on my lap. (laughing hard) Dynamite Jack reaches over to Angelo Mosca and says, ‘HOLY MOLY, THAT MULLY HAS ONE UGLY BROAD WITH HIM TONIGHT…LOOK AT THE NOSE ON HER!’ (laughs hard)"

"Pantyhose was lying all over the place. Oh my God, there were all kinds of unmentionable stuff!"

"Ric’s wife had left him, and he’d gone with Beth [whom he married in 1983], and my wife was a friend of the first wife and detested Beth…

"[Flair and I] had a van together, and he used to keep a bunch of stuff in his closet in the van.

"One day, my wife was getting ready to go to church, and she asked me if she could use the van. I went, ‘Oh my God…Ric had the van last night…’

"So I run out there real quick, and I look in the van…and pantyhose are lying all over the place…

"I look in his closet, and oh my God, there’s all kinds of unmentionable stuff! I’m pulling stuff out of there as fast as I can and throwing it in this bag so the kids and everybody can take the van to church!

"I said to myself, ‘Wait a minute. This is gonna work [for an angle on Mid-Atlantic TV]…two best friends splitting up. He’s gonna take his stuff from the van, and I’m gonna take mine.’ So I bring out the pantyhose and the makeup from his closet on TV…

"You know…I was from West Texas, and Flair was the little hotshot snotty-nosed punk. It was his stage now; he wanted to be the top heel. That’s where we were then.

"He was changing, he was evolving…I mean REALLY was evolving. Nobody knew what was fixing to happen to this guy. I mean, he became one of the biggest showbiz characters the business would ever have forever. We didn’t think he could be that big- but he was.

"One night we’re in this van, both of us naked, drinking and acting like idiots as usual…and we made the mistake of letting Jimmy Crockett drive.

"So I put him on my back, and I’m piggy-backing Ric Flair, naked, down the highway.

"I understand that on the CB [radio] some truck driver said, ‘Gawd darn, yew ain’t gonna bulieeeve this… there’s this great big ol’ cowboy carryin’ this blonde broad…an’ yew oughta see her, man…that is the ugliest woman I ever seen in mah LIFE!’" 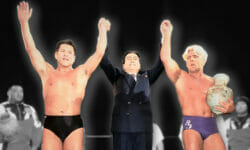