After Randy Orton was left dazed in the ring after a belly to back suplex spot gone bad, Mr. Kennedy was soon later fired from the WWE. Here’s how it all went down.

During a house show on August 4th, 2008, Mr. Kennedy dislocated his shoulder in a match against Shelton Benjamin. What followed was ten months on the sidelines until he returned in a 10-man tag team match on the May 25th, 2009 edition of Monday Night Raw.

Four days later, Mr. Kennedy was released from the company.

The reason behind Kennedy being fired only four days after returning from injury was due to a botched belly-to-back suplex. Accidents in the ring are unfortunately a hazard of the business, but if you mess up with the wrong superstar, bigger consequences can follow, as Randy Orton showed. Randy Orton, in a fit of rage after a match against Mr. Kennedy, complained to management about Kennedy’s unsafe nature in the ring after he was dropped awkwardly.

Mr. Kennedy describes the day leading up to the moment he left Randy Orton dazed in the ring in an August 3rd, 2009 interview for ESPN’s Pro Wrestling Report:

“To be honest with you, I kind of had a weird vibe all day. Randy Orton and I had become very good friends…we rode together, we were tight, we were buds…when I got to the building, I ran up behind him and gave him a big bear hug from behind and he treated me like I was just an acquaintance of his. And then he made such a big stink about me supposedly dropping him on his head. He literally blew up in front of all the talent including Vince and Stephanie and began to lecture me about how I had to be careful and his health was very important. It just doesn’t make sense to me…”

Mr. Kennedy also said this in regards to the botched move that lead to his being fired:

“Randy jumped really, really hard. In wrestling, it’s give and take….It was a matter of either I drop him on his head or I help him through this. His neck never even touched the mat, which makes me wonder why he even went to the trainer’s room to get his neck taped up. He was so injured that he went on to wrestle three nights in Mexico.”

These comments didn’t please Randy one bit, and on the now-defunct Randy Orton message board, he posted this in response.

“He is in denial. He thinks you have to be able to do a moonsault to know how to work. As far as dropping me on my head, he did. He never got to see all 4 camera angles of him doing it. I did. Plus, the left side of my neck down to my trap was sore all week in Mexico. I did tell Ken that he shouldn’t be dropping me on my head with such a simple basic move. He never said sorry, and even called me a liar after the match. I remember looking at him in disbelief. And yes, I did tell management I did not want to work with him after that. Who wouldn’t? That’s my side.”

“There is another thing…never did I get my neck taped as he claims it was in that interview. Also, the whole bearhug story does have some truth to it. Early in the day that morning in LA, he came up behind me and grabbed around my chest and picked me up off of the floor. I don’t know anyone who enjoys being tackled from behind and picked up off the floor. When he let go and I realized it was Ken, I was like, `Oh, ok, you’re back, cool.’ My reaction to his big return was watered down and I found it very funny reading in his interview that he felt like I had an agenda, or almost like I wanted him gone. Not until I was given a belly to back suplex onto the back of my neck did I have any negative feelings with Mr. Anderson. I honestly hope for his wife’s sake that he can find something else he’s marginally good at, and earn a living. I know he really wants to entertain, so good luck, Ken, you are gonna need it.”

It wasn’t just management that Randy Orton had voiced his displeasure to. Allegedly, he had also persuaded John Cena to put in a few words, too.

In a 2017 YouShoot, a reflective Mr. Kennedy accepted what had happened in an understanding manner:

Kennedy, when asked if the firing was justified, had this to say:

“Everybody can say that it was Randy Orton and John Cena and all that stuff… that was the straw that broke the camel’s back. I came out publicly and said stuff about… I should have never opened my mouth about the Chris Benoit thing. And I think you get in that situation and you think that the world needs to know, the world NEEDS to know what Ken Anderson feels about this particular topic. And it’s just… It’s not true. And so I made some missteps. There was misstep after misstep after misstep on my part and so that was just the straw that broke the camel’s back. And I think when those guys went to Vince, he was just like ‘You know what? I’m tired of hearing his name in a negative light. Get rid of him.’ Plus I had been hurt a few times.”

Mr. Kennedy has not been seen in WWE since… But as we know with the WWE, even the unlikeliest of surprises can happen.

Watch the Belly to Back Suplex Spot With Randy Orton That Would Ultimate Get Mr. Kennedy Fired from WWE: 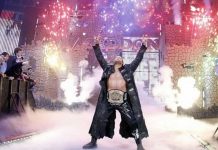 Wrestling Music | 6 Superstars Share the Story Behind Their Theme Song