“Way back in 1979 when I was there working for Vince Sr in a tag team match one night, it was me and Andre and Ivan Putski versus the Valiant Brothers. Andre did not like Putski at all. Andre told me, ‘You tag me. No one else.’

‘You bet boss, whatever you say!’

“If Andre didn’t like you, he would make your life freaking miserable. Putski wasn’t really one of those guys that a lot of people liked.

The night that Randy and I had the cage match at Madison Square Garden, just prior to our match, Andre worked with Bam Bam Bigelow. [After the match], Bigelow walked to the dressing room, threw all his stuff together, grabbed his bag and walked out the back door and quit.

[Bigelow] came back later and he told me, ‘You know what? That was the best thing that ever happened to me. Because Andre was right.’ He said, ‘Because I had a horrible attitude.’

Andre has adjusted a few attitudes!”

Stories like these are not uncommon of Andre the Giant. When he met you, he either liked you or didn’t like you and that was that. Randy Savage could attest to that. This left for some interesting moments in and out of the squared circle.

Related: ANDRE THE GIANT, “The Eighth Wonder of the World” – His Very Best Stories!

Here, Jake Roberts backs up what DiBiase said, explaining why it was better to stand up to the 8th Wonder of the World than not, even if it had noxious ramifications…

“We had a little rough road at first…

We had a match in Los Angeles and he just goozled me the whole match. Everything I tried, he blocked it. Just freaking goozled me for 20 minutes and I was furious.

I came back to the locker room and I just started yelling at him.

‘What the fuck you doing out there, man? We ain’t going to make any money with you doing that shit! That’s bullshit! You goozled me, man, you didn’t give me a damn thing. We’re not going to make a damn dime and I just don’t want to work with you if you’re going to be like that, man. Screw you…’

He looked at me and he told me to sit down.

I don’t know why I did because he could have reached over and he could have killed me. He said, ‘Now, we don’t have a problem. I just wanted to see…’

Basically, he wanted to see if I would man up. Once I manned up, man, what a cake up. I mean, he still brutalized me out there but he was just having fun doing it. You know? It’s different then. Whether it be him standing on my hair and grabbing my arm and I can hear my hair popping like piano strings or him sitting on me and farting on me, which was a horrible experience. I did not realize how long a Giant could fart. So, it was like 25 seconds of just brutal gas. There’s something about vodka and wine with not much food that really gives a man a nasty potion to inhale.

I know I thought I had a birthmark on my arm but it was just a wine stain from his ass. [Laughs.]

He could do some stuff to you out there, man. His strength was just incredible, it was unbelievable. But, I loved the man, I loved working with him. We had a great time.” 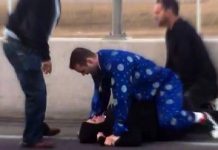 Wrestling Heroes | 4 Wrestlers Who Went Beyond the Call of Duty 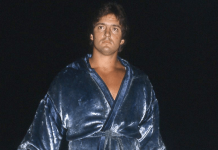 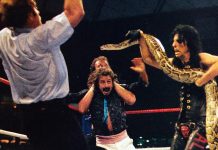