As Sting stepped off the edge of the platform, suspended 140 feet above 17,000 fans, he quickly realized something was very wrong.

Sting and His Brush With Death 140 Feet Above The Ring

In an interview with WrestlingEpicenter.com (H/T: ‘Wrestling’s Glory Days’ Facebook page), Sting opened up about his first time rappelling from the rafters the chaotic moments that ensued after realizing he had been strapped in incorrectly.

"You know, it was scary. And we did it a couple of different ways, and it didn’t matter which way we did it; it was always scary.

"My training happened on the very first day that I did it, which was Chicago at the United Center. We had a couple of stunt guys there working with me, and I rappelled four times earlier in the day to practice. I actually did some rappelling with the same stunt guy out here in California, off some cliffs and rocks – you know, practicing and getting ready.

"The United Center was 290 feet*, so high that when we were up there trying to talk to the guys on the ground earlier in the day, they couldn’t hear us. We had to use walkie-talkies.

"So, it was high, and I was having a tough time with it. It wasn’t working very well. I came back to Eric [Bischoff] and said, ‘I can’t do this.’

"I said, ‘I tried it four times, and it’s just not working very good.’

"I was spinning; I kept spinning real bad, And the stunt guy kept assuring me that the reason why was because I wasn’t just sliding fast enough down the rope. I was crimping with my hand because it was scary, man.

"He said, ‘Look, if you just go down it [at] one speed, and just control your speed on the way down – but just go a little faster – you’re not going to spin.’

"The only other chance I had to try it again would be live [on TV]. And I knew that it was make or break – I knew that if I ended up spinning, I knew that that was going to be the end of the career – you know, the laughing stock – and it would’ve been over.

"The cue comes – the crowd is as loud as you can imagine, and the sound just travels up — it’s deafening. And then we’re talking to each other up there, and then you’re screaming at each other- the pyro’s going off, the lights, and suddenly you can’t even think straight; you can’t even hear yourself think. That’s how chaotic it is up there.

"And when I stepped over, we realized we had the thing set up backward – so while I was standing on the edge, we had to flip the rope around and then reweave it through…

"I’m telling you if I’d stepped over and done it, the same thing that happened to Owen would have happened to me."

Thankfully, Sting and the technicians caught the error in time and were able to readjust his cables moments before his dramatic descent from above.

Watch Sting Rappel From the Rafters for the Very First Time on WCW Monday Nitro on January 20, 1997:

If you enjoyed this story, be sure to check out these related pieces:

Hogan Hogan and Sting – The Mess at WCW Starrcade 1997 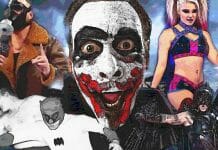