Evan Ginzburg, Pro Wrestling Stories writer and associate producer of the movies The Wrestler and 350 Days, gives a first-hand account of what it was like to be a part of the upcoming film starring Bret Hart and Superstar Billy Graham. 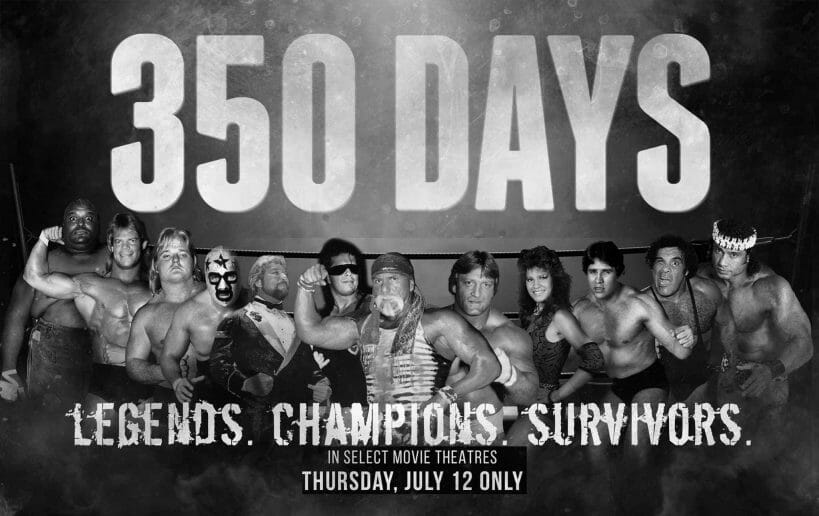 As a boxing cutman working with such champions as Yuri Foreman and Kendall Holt, and as an indie wrestling promoter, Darren Antola had seen the not always glamorous sides of both boxing and professional wrestling.

He had an idea for a movie. "What if the 1980’s legends of the professional wrestling business told the tales of what it was like to live a sex, drugs and rock & roll lifestyle 350 days a year on the road and the toll it took on them?"

Bringing on board his best friend and financial partner David Wilkins, and longtime actor and director Fulvio Cecere (Cinderella Man), they approached me several years back to come on board the project which is now finally reaching fruition. I had pretty much sworn to myself that after The Wrestler I wouldn’t attach myself to another wrestling film. I mean, Mickey Rourke’s performance was iconic, there were Oscar nominations, critical acclaim and a standing ovation at a sold-out New York Film Festival at Lincoln Center. How could anything top THAT?

Yet at the same time, I sensed their passion, dedication, and love of professional wrestling, and most importantly their desire to make a truly great film.

As Associate Producer on the project, I’d serve a similar role to what I did on The Wrestler. I’d help in any and every way I could to get them what they need to not only make this the best movie possible but also publicize the hell out of it, so people come out and see this one night only special screening on July 12th nationwide.

Editor Michael Burlingame also "got it." He had worked with Paul McCartney, musical icon Sting, HBO and was Emmy nominated. He was going to somehow edit down 80 or so hours of footage that Fulvio, Darren, and crew had painstakingly shot around the country and Canada, and cherry-pick the most poignant and moving parts. This was not going to be another shoot interview in a dingy hotel chronicling who the booker was back in ’72. This would be about the toll this business took on your mind, body, marriage, family, and living that exhilarating yet grueling and sometimes insane lifestyle.

And one by one the wrestlers opened up in their interviews. Wendi Richter talked about not being able to have kids as she was on the road so much. Billy Graham powerfully talked about being saved by a 17-year old accident victim who was his organ donor. And there were endless tales about coming back from injuries so numerous and devastating that lesser mortals would have quit.

Finding rare photos and footage became an ongoing challenge. At first, odd requests became a holy grail. "We need pictures of wrestlers with their cars. Carrying luggage. In bars." I "got it." Such shots told their stories about being on that endless road. But finding them was a different story.

Yet somehow, we did. Calling on favors and contacting every wrestling photographer and fan we knew, we got what we needed. And amazingly, there I was in the background of a long-lost shot that one photographer had, waiting in a hotel near Madison Square Garden for the then-WWF stars’ autographs. Things had amazingly come full circle some thirty-plus years later.

Sadly, as we continued our five-year journey with the film, many of the stars passed away. Ox Baker hit particularly hard as he was so charismatic, colorful and funny in the film. We realized that in several cases, we probably had the last interviews ever conducted with some of these legends.

Fathom Events, the distributor requested that we do something special beyond the movie and with deadline pressures, it was decided quickly to interview the universally beloved and respected JJ Dillon as part of the festivities. Upon entering the theater there will be trivia, followed by JJ introducing the film. Then the 350 Days documentary will screen, followed by my interview with JJ, which is powerful as it occurred mere days after the death of his dear friend and my childhood hero, Bruno Sammartino. We talk about the Horsemen, Piper, and even compare wrestling then and now. JJ also chronicles his own half-century in the business and doesn’t hold back whatsoever.

In short, five years have been spent to make a film that will not only entertain, but touch you as well, and to not just make a movie, but create an event worth marking down on your calendar. Come out and support wrestling history and true independent cinema on July 12th.

Editor’s update: 350 Days is now available! Here’s how you can watch it today

The editorial description for the 350 Days wrestling documentary is as follows:

In "350 Days, " pro wrestling legends Bret Hart, Superstar Billy Graham and dozens more peel back the curtain on the severe toll working on the road 350 days a year took on their bodies, families, marriages and psyches. This compelling documentary chronicles their struggles to survive the chaos of 1980’s era wrestling. Living a rock and roll lifestyle, they faced nightly temptations, battled their vices, and were absentee parents and spouses while chasing dreams of fame and fortune. In their own words, with the cutting insight and sharp wit one would expect from such legendary icons, these gentle giants tell their harrowing (yet often darkly humorous) tales as marriages dissolve and relationships with their children are strained, sometimes permanently. Such is the life of the professional wrestler; such is life itself.

Evan Ginzburg is the Senior Editor for Pro Wrestling Stories and a contributing writer since 2017. He's a published author and was an Associate Producer on the Oscar-nominated movie "The Wrestler" and acclaimed wrestling documentary "350 Days." He is a 30-plus-year film, radio, and TV veteran and a voice-over actor on the radio drama Kings of the Ring. He can be reached on Twitter @evan_ginzburg or by e-mail at evan@prowrestlingstories.com.