Perry Saturn and his bravery is a story that has become legend amongst wrestling fans. I first heard it over a decade ago.

That’s exactly how it was told to me. There were no more details – only five words. For years, they were all I needed. My imagination ran wild with those words. Then, about nine months ago, I dug into it a bit. The first thing I found out: it wasn’t anything close to what I pictured. There was no hero moment. He didn’t get to have some witty banter with the girl afterward. All Perry Saturn got in return for his heroics were two bullets from a .25, and years of hardship.

Let’s rewind back to April of 2004. Saturn was driving his girlfriend to work in Atlanta when he stumbled upon a woman being raped by two men. Unfortunately for those two men, Perry Saturn was an Army Ranger. He originally enlisted when he was 17. As such, when he saw what was going on, he sprung into action, and actually managed to fight off the two attackers. During the altercation, however, Saturn was shot once in the neck, and once in the shoulder. In his YouShoot interview, Saturn says he thought the one to the shoulder was a punch.

He must’ve been so full of adrenaline. I can’t even imagine what it felt like. Especially once all that wore off and all he felt was the pain.

A pain that was so intense, it sent him spiraling down into addiction. Meth was Saturn’s drug of choice. As you can imagine, that didn’t help matters. He ended up homeless, not long after.

So, let’s recap: Perry Saturn intervenes, saving a woman from rape at the hands of two men, and what does he get? Shot twice, which, in turn, helps lead to him getting addicted to meth, which, in yet another turn, leads to him ending up homeless for years.

The following exchange took place during an interview with Perry Saturn and Bill Apter, recorded in 2010 at K&S Wrestlefest. The interview begins with Apter surprised to see Saturn, who many believed to be dead at this point. A year earlier, he made his full recovery from addiction and even got married to a one Lisa Marie Kuhlemeier.

There’s a light at the end of every tunnel.

“You got shot. What were the circumstances?”

“Somebody shot me with a gun. What do you mean?”

“In Atlanta? Okay. And so, from that time, you were – what were you doing after you, uh, after you got better from that?”

“Well, I’m just now gettin’ better. I developed a bad drug habit. What people do when they’re down, you do stupid things to make it worse. You know? So I hated the world. You know, I was pretty screwed up from being shot, and, uh, instead of just, like, buckling down and gettin’ better, I started doing meth, and I started doing meth by the tons.  I got addicted to it, and that took over my whole life.”

“What do you remember from that time?”

“Being high a lot. Just, you know what, you know that the stuff you’re doing is not helping you, but you can’t change, or you’re not willing to change, I don’t know what it is. Where you have to get to a point where you have to make a change. I guess what I remember most – big secret here – I never told anybody this, so, but-“

“You’re telling it to the world now.”

“I remember thinkin’ of Perry Saturn, you know, and not even knowing that…like, I couldn’t even imagine being that person. The drug addict was such a different person that it was hard for me to even believe that I was that one person, you know, and until I could come to a realization that I could be who I was, I wasn’t gonna be able to change things.”

“How did that happen?”

“Well, I was homeless for two years, and that’s a pretty rough life. I got clean for a little while, and I got an apartment, and since I got an apartment now, things are going well, I started doing drugs again, and I was back on the streets for another six months, and then I just couldn’t do that anymore.”

What struck me the most about that exchange is the fact that he never brings up the woman. He focuses on himself, and his personal failings. He could have mentioned that, due to his actions, he now has a steel plate and 3 stainless steel screws where his C-5, C-6 and C-7 vertebrae in his neck were badly injured, but he doesn’t. He never once tries to use his heroics to score points.

A lot of people wouldn’t have done what he did. It’s a sad truth. Bystander Effect is a thing. That should tell you all you need to know.

Bystander Effect (or Bystander Apathy), as defined by Wikipedia: “a social psychological phenomenon that refers to cases in which individuals do not offer any means of help to a victim when other people are present. The probability of help is inversely related to the number of bystanders.” In other words, the greater the number of bystanders, the less likely it is that any one of them will help.

Related: Wrestling Heroes: When Wrestlers Went Above and Beyond the Call of Duty

Risking life and limb for a stranger is a lot to ask for a lot of people. Yet, by all accounts, Perry Saturn never hesitated.

That willingness to act is what separates him from the others. More importantly, it’s what makes him a hero.

What is Perry Saturn up today?

Saturn returned to the ring on October 15th, 2011, wrestling his first match in over seven years. He later won his first championship in over a decade as he defeated Arik Cannon & Sir Bradley Charles in a Triple Threat match for the 3XW Pure Wrestling Championship on April 27 in Des Moines, Iowa. In March of 2013, Saturn wrestled at Jerry Lynn’s retirement show for Heavy On Wrestling in Minneapolis, Minnesota. He competed in the opening six-man tag match, where his team came out victorious.

According to cagematch.net, his last recorded match was on May 24th, 2013, where he teamed up with Raven as part of the team The Flock where they defeated Brady Pierce & Mad Man Pondo at RPW Lights Out in Merrionette Park, Illinois.

Not much else is known of him today though we hope that he has continued on his path of sobriety and found a new outlook on life. If you know anything else in regards to what he’s been up to, send me an email at admin@prowrestlingstories.com and I’ll update it here, giving you credit!

UPDATE (Sept. 18, 2016): As reported on ProWrestlingSheet.com, Perry Saturn made a rare appearance at a House of Hardcore event on Saturday, September 17th, 2016. He met with Bill Apter to discuss what he has been up to in recent years. According to Saturn, he’s mainly been dealing with a brain injury which limits what he is able to do. The wrestler says dealing with the symptoms is all he currently does, but luckily his faith and family are helping him get through the difficult injury. Perry added, “It’s a struggle right now.” We are sad to hear this news and wish this hero and legend of the ring nothing but strength and improved health.

FURTHER UPDATE (Jan. 12, 2017): Perry Saturn isn’t doing well. In a heartbreaking video just posted on his Facebook page, Saturn addressed his current situation saying he is still very sick and is afraid in a week or two he will become homeless. He is calling on his fans for support. Here’s a link to his GoFundMe if you want to make a donation: https://www.gofundme.com/perrysaturn 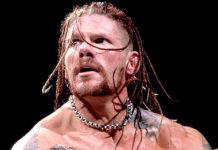 Raven in WWE | Where Did It All Go Wrong?

Wrestling Heroes: When Wrestlers Went Above and Beyond the Call of Duty