These Nikolai Volkoff stories will have you covering your nose and thanking your good graces that you don’t have a Mr. Fuji-type in your friendship circle!

On July 29th, 2018, the world lost a legend, and I lost my friend. Volkoff was as kind as they come in this cutthroat business and these Nikolai Volkoff stories shared by the late-great Killer Kowalski show a side to him not often caught on camera.

In those long-ago days before the Internet pretty much killed "the sheets," I published/edited the Wrestling- Then & Now newsletter for two decades. Although it never attained the readership of the major news sheets like The Observer or Torch, we prided ourselves on our quality writers and historians as well as the legends like Walter "Killer" Kowalski and Johnny Valiant, who contributed their own columns and pieces.

It is hard to believe that both my friends, Walter and Johnny, and now Nikolai Volkoff, are now gone, but I am grateful to Pro Wrestling Stories for allowing these now decades-old pieces, such as these Nikolai Volkoff stories shared by Killer Kowalski, to live on because they are the history of this business from the legends who lived it.

Killer Kowalski is considered by many to be a Top 10 or even Top 5 all-time heel, and it was my honor to showcase his column in my publication and to call him a friend.

Editor’s note: This piece was originally curated by Evan Ginzburg and published in the 1999 edition of his now-defunct ‘Wrestling- Then & Now’ annual. Jeff Archer transcribed the original text. This is the first time this article by Walter "Killer" Kowalski is available in digital form.

"I am honored to consider Nikolai Volkoff, a good friend. It’s ironic that he has been around so long that it is hard to believe he is still an active wrestler.

"I first met Volkoff years ago when I was still wrestling. At first, he used another per­sona and was part of a tag team. Eventually, he picked up the Soviet gimmick, and his career skyrocketed. That gimmick got him over big.

"We wrestled quite a few times before I retired. He was a good worker and used the gimmick to its fullest. When I retired and began to promote, I used him on my shows.

"Nikolai Volkoff is a fine human being with a great sense of humor. When I would wrestle in Maryland, I stayed at his place. He and his wife had a special room for me upstairs. They would feed me, even taking into consideration my vegetarian diet. When he wrestled around Boston, I would recip­rocate, and he would stay with me.

"Volkoff was always one who appreciated a good practical joke. One time, however, doubt was cast on whether he did something when he was completely innocent.

"In 1976, I was traveling with Big John Studd. We were the WWF tag team cham­pions at the time, The Executioners. We stopped at a motel and took a room. In the adjacent room was Nikolai Volkoff and Fuji. George Steele and his girlfriend occupied the room next to theirs.

"Volkoff, Fuji, Steele, and Studd were playing cards. I was on the bed reading. Fuji got up and disappeared. We assumed he went to take a leak. We did not see that he took Steele’s girlfriend’s purse with him. A few minutes later, he returned and resumed his card playing.

"Soon after, Steele’s girlfriend asked him to bring her purse so she could have a ciga­rette. He went to get her purse and reached in for the cigarettes. He pulled something strange out of the purse. The words "Smells like shit!" came from several mouths. It was shit. Fuji had shit in the purse. John Studd and Nikolai cracked up just as she entered the room. Fuji was still playing cards as if nothing had happened.

"Steele’s girlfriend was irate. She saw Studd and Volkoff laughing and blamed them both. While she was screaming at them, Fuji kept on playing like he had no idea who did it.

"Fuji was a tremendous practical joker. This is an article about Nikolai Volkoff, so I will only tell one Fuji story. After a show years ago, I was driving along the Massa­chusetts Turnpike. I heard bump … bump … bump. I saw a service station and pulled over, all the time asking myself, "What the fuck is this noise?" He had padlocked the hood of my car to the grill. I had to pay somebody $5 to cut it off.

"Back to Volkoff. After I retired, I used to perform referee tasks occasionally as a guest. One night, Tito Santana was taking on the dreaded Soviet. Volkoff had Santana in a submission hold and loudly stated, "Ask him, ref! Ask him!" So, I bent over and asked him, "Tito, do you eat pussy?" They both broke up laughing and had to try hard to keep their composure to make it appear that the match was still going on. I didn’t say it out loud, so the fans thought I was asking Santana if he gave up. By the way, Santana answered me. He said, "Sometimes."

"I will end this article the same way I be­gan it. I am honored to have Nikolai Volkoff as a friend."

In the days since Killer Kowalski wrote this, Kowalski, Volkoff, Steele, and Studd have all passed. May they all rest in peace. 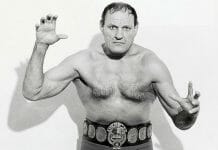 Killer Kowalski – A Tribute to My Friend 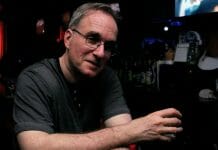 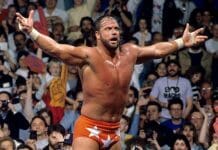 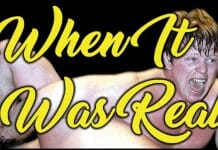 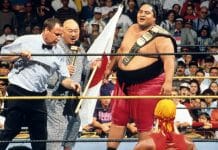 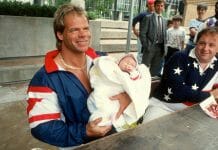 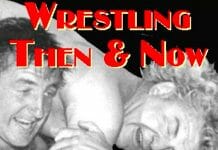 Legends Live on in “Wrestling Then & Now” Documentary