The Nasty Boys have a long history of letting their anger get the better of them. Take for instance the time they came moments away from ending the life of Ken Shamrock (for real)! This situation was no different. Jerry Sags thought Scott Hall had taken liberties with him during a run-in at a WCW house show and rather than talk about it afterward or handle things in the locker room like men, Sags decided to take matters into his own hands in front of the fans. The result? A very nasty incident in the ring followed by Sags coming within inches of his life at the hands of an enraged Outsider wielding Sting’s baseball bat in the back! 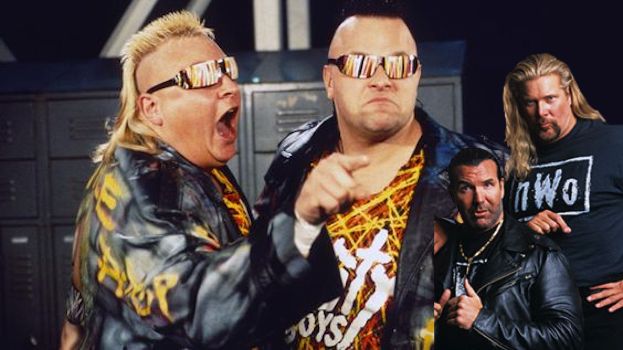 Jerry Sags: “Scott Hall was different when he came down to WCW. I don’t know if it was chemically altered…”

In an interview with the now-defunct WrestleShark.com, Jerry Sags of the Nasty Boys opened up about what led to him punching Scott Hall out in front of a live WCW audience:

“The guy I punched in the mouth was pretty powerful in the company, my old buddy Scott Hall. I wish I could take that punch back a million times. Hall and Nash came in, I didn’t know Kevin that much… he became friends with friends of mine, Shawn, Triple H and Scott…

“Scott was different when he came down to WCW. I don’t know if it was chemically altered. Everyone changes when they come out of that pressure cooker in WWF. It’s stressful, some of the guys turn into backstabbers, some guys deal with the pressure in different ways. We were doing a thing [at a house show]… I felt this blow to the back of my skull, it knocked me out, I had a concussion, the whole nine yards. I was mad about it, almost the kind of thing I was gonna fight him then, but I let it go. JJ Dillon called me and said, ‘We just need you to make the rest of these bookings, you’re on the marquee.’

“So we get into the match, I tried to stay out as much as I could, it got all screwed up because Syxx-Pac was supposed to run down and do something, but he never showed up. Suddenly, I didn’t know what hit me [but] I went down, I’m seeing stars. I felt like there was a cut on the back of my neck, but I’m feeling back there and there’s no cut. I look around and I didn’t know who hit me from behind… I see Scott with a chair and he throws it in my face. I go, ‘That’s it!’

“I walked in the ring and just started hitting him with punches, knocked him out. It just happened like that, I didn’t wanna fight him, it just happened. Something was building up there from the first time he hit me, then it happened again.

“I hear this noise from the shower, Kevin Nash came in the locker room with a bat… [Nash] was saying, ‘We’ll see who has the stroke in this company!’ That was pretty much him telling us we were getting fired. At the time they were practically booking, and I’ve just knocked the booker’s teeth down his throat.

“When we watched the tape back, we see, ‘Oh my god! It wasn’t Scott with the chair, It was Kevin Nash with the tag belt!'”

Scott Hall on Jerry Sags of The Nasty Boys: “He gave me everything that he got but he couldn’t even knock me out!”

In a recent shoot interview, Scott Hall gave his side of the story.

“Kevin and I got paid well right when we got into WCW and a lot of the guys who were there took pay cuts, but not because of us. We didn’t know anything about it. Some guys were making around $350,000 before we came and WCW were not doing house shows at the time because they couldn’t draw. So they said to some of the guys, ‘We can’t give you 350 but we’ll give you 300.’ A lot of the guys agreed to it.

“Apparently The Nasty Boys agreed to take the pay cut and when they bitched about it, the way I had heard about it was they were saying, ‘Hall and Nash are making all the money!’ So right away we got some heat.

“We get heat anyway. I get heat all the time- I don’t care. I like it! We’re heat-seeking because we’re obnoxiously happy, you know? We’re walking around smiling and laughing because we get paid and we don’t care who knows!

“What happened was- I’ve known The Nasty Boys forever. I know them from back when they broke into Brad Rheingans’ camp in Minneapolis and I considered them to be good friends. I still do, but what happened was me and Kev were supposed to hit the ring and lay The Nasty Boys and some Mexican wrestlers out with chairs at the end of their match. I went first because I’m faster than Kev, so I slide in first with the chair, I straddle one of the Mexican guys who are down and I waffle Sags with the chair.

“So I hit him, but I didn’t know I potatoed him. Sags rolled out of the ring and he had his back to me and I thought he was feeding. I almost hit him again from inside of the ring to the floor because I thought he wanted another one!

“Before, when we were laying it all out in the back, Knobbs kept going, ‘Make sure you lay it in! Lay it in!’ So when he comes to the back, he’s got a big goose egg on his head. As he’s turning the corner, I’m sitting there talking to Kev and I said to him, ‘Oh man, I potatoed Sags, man. I’m so happy I didn’t hit him again because I almost did!”

“I was doing a nervous laugh and it was at that moment when Sags turned the corner with a big goose egg and he sees me and Kev laughing and he’s thinking, ‘They’ve taken my money, now they’re taking liberties with me! He potatoed me on purpose and now he thinks it’s funny!’ This is the way I perceived how he perceived it because I’ve known them for a long time.

“Some time passes and we’re now in another town, Baton Rouge, Louisiana or someplace like that, and it’s Meng and Barbarian, The Nasty Boys, and me and Kev in one of those clusterfuck three tag team deals. The finish is Kid [Sean Waltman], who wrestled earlier, was supposed to run down, throw us a gimmick, and we’re supposed to knock everyone out and keep the belts. Well, Kid got injured so he doesn’t come down, so now it’s time to go home but there’s no Kid so I’m thinking, ‘What is going on?’ Now it’s really getting out of control.

“At this point, The Nasty Boys start throwing furniture in the ring. Sags goes stomping down the steps, throws a plastic chair into the ring, goes stomping back up the steps, and in the meantime, I go and I pick up the chair. You just threw it in the ring, you dummy! So I picked it up. He comes walking in, looks right at me, and I’ve got the chair, it’s a plastic chair, he’s looking right at me and I think he’s paying attention so I push the chair over to him and it rattles him and the people go, ‘Oooooooh!'”

After the beat down in the ring, Kevin Nash marched to the locker room, picked up Sting’s baseball bat and was ready to kill Jerry Sags of The Nasty Boys. “Say the word. He’s dead!”

“Finally, I look at [Sags] and I realize he’s raging. He’s mad! He’s seriously mad so I just pushed him away and go, ‘What’s your problem?’

“He got my tooth out. I lost a tooth! He knocked it all the way out to the fifth row. And it punctured my cheek. My mouth was filled with so much bacteria that it puffed out instantly. So I turned back around, by now it’s over, we finally got them out of the ring, Kev is standing next to me, we’ve got the straps and I turn to Kev and ask, ‘Is my face all messed up?’

“Kev goes and marches back to the locker room, he picks up Sting’s baseball bat, and he goes, ‘Say the word. He’s dead!’

“Kevin walked in there and swung the baseball bat right above his head and goes, ‘You want to find out who’s got stroke around here, you motherfuckers?’

“I go back to the hotel, we’re all going to go out and party in Baton Rouge that night because it’s just a sweet little party town. All the Mexican boys like Rey Mysterio, Juventud Guerrera, and Konnan, they all come to my room with Kev and I’m sitting there pissed. My face feels sore and I can’t laugh because it hurts and they’re all going, ‘Come on out, let’s go!’ and I’m going, ‘Screw you guys! I’m not going anywhere like this,’ you know?

“Bischoff called my room that night and he goes, ‘I heard what happened, oh my God. [Sags] is fired!’

“I have known Sags twenty years. He’s got kids. I said, ‘I don’t want to work with him anymore but don’t fire him.’

“I think what ended up happening was Sags ended up sitting at home for a long time and he got paid. I’ve seen him since then and it was just something that happened, you know? I didn’t intend for that to happen to him, but he intended to hurt me which was wrong. The way I look at it is if you have a problem with me, you should have fought me in the locker room. Don’t hit me with live rounds in the ring when I’m giving you my body. I’m bleeding in my face out there and he’s hitting me with everything he has. One thing I’m proud of is he gave me everything that he got but he couldn’t even knock me out!”

If you enjoyed this article, be sure to check out these other recommended stories from our site: