Maurice Vachon, better known to fans as Mad Dog Vachon, was a tough-as-nails wrestler known for his intimidating fighting prowess in and out of the ring. There are some really great shoot fight stories out there that prove this WWE Hall of Famer was just as much an animal outside of the ring as he was inside it. In fact, in his prime, he very likely could have given Meng or Harley Race a run for their money!

His father saw his son Maurice’s shoot fighting ability from a young age and did everything that he could to help channel his son’s skills in a positive way. Mad Dog’s journey from coming home from Catholic school daily with blood plastered all over his white shirts to the 1948 Olympics at age 18 and eventual foray into professional wrestling off of the recommendation of a mafia godfather is quite the fascinating story!

Mad Dog Vachon: “A lot of people came to try me out and see how tough I was like I was the fastest gun alive.”

My father was a policeman in Montreal, he was a constable. Every day I went to school and the kids in school can be cruel to one another. They used to call me ‘Vachon, cochon, Vachon, cochon…’ Cochon means “pig” in French, you know what I mean?

I would get into fights and come home from school with my white shirt from Catholic school all messed up with blood. My father would look at my shirt and yell – he had a voice twice as strong as mine, you know – ‘Maurice, you’ve been fighting again!’

One day he took me to the YMCA in Verdun, which is a suburb of Montreal. He said I was always fighting in school. My dad was crazy about boxing and wanted me to be a boxer. The officer at the YMCA told my Dad there was no class for boxing there. He said, ‘Why don’t you take him downtown to Drummond Street to the Central YMCA? Maybe they have boxing classes down there.’ So he took me over there and the first guy my dad talked to over there was Frank Saxon, the wrestling coach.

He says, ‘Mr. Vachon, I don’t recommend boxing for your son. In a few years, he’ll be punch drunk from all the blows to the head. Why don’t you bring him down here and we can teach him wrestling? Who knows, someday he might be good enough to wrestle in the Olympics!’

There were no classes anywhere in Canada for kids my age, but they made an exception for me. So I was the only one who was 12 years old who was doing that kind of wrestling in the whole country.

“It took me 9 days to get to London from Montreal by boat. Today, if people take 9 hours to fly, they complain.”

It took me 9 days to get to London from Montreal by boat. Today, if people take 9 hours to fly, they complain.

I’m very proud of my past in amateur wrestling. I did my share, I paid the price.

I was a bouncer at a nightclub in Montreal for a long time. A lot of people came to try me out and see how tough I was like I was the fastest gun alive. I beat the shit out of some guy and one day, a guy who used to be a pro wrestler, named Armand Corvelle, who wrestled in the days before TV, saw me.

Armand Corvelle was a consigliere for a local godfather in Montreal by the name of Vic Cattrone. Cattrone was also a wrestler before he became a godfather. Armand said, Maurice, I want to take you out for dinner sometime next week.

He talked to me and said, ‘Maurice, you’re a nightclub bouncer in Montreal and everybody’s always coming after you. So far you’re on top…but one of these days, somebody’s going to pull a gun on you and shoot you in the head. I recommend that you quit the bouncing job and go into professional wrestling.’

I took his recommendation…”

Want to read more stories about badasses in professional wrestling? Be sure not to miss these articles: 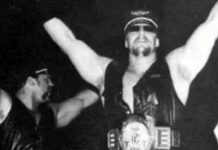 The Road Warriors | The Backstory Behind Their Formation and TV Debut 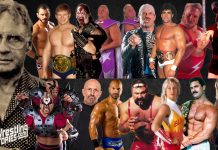