Founder and Editor-in-Chief of Pro Wrestling Stories JP Zarka recently appeared in a special episode of Songs from the Squared Circle.

In this fun interview, JP and Alan Banks discuss their first “WrestleMania moments,” backstage stories behind memorable WrestleMania matches, the very best and worst of “The Showcase of the Immortals,” plus they play their favorite songs relating to “The Greatest Spectacle in Sports Entertainment!”

Listen to JP Zarka on Song from the Squared Circle with Alan Banks in full below:

Songs from the Squared Circle with Alan Banks

With commentary, behind-the-scenes stories, and interviews, Alan talks all things wrestling while sharing the nostalgic theme songs of wrestlers past and present.

Weekly episodes can be found on Syndication Nation on MixCloud.

Be sure also to follow Syndication Nation on Facebook to keep up with all the latest on Songs from the Squared Circle!

These interviews may also interest you: 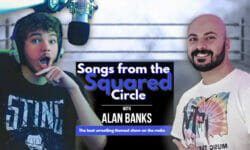