WWE Hall of Famer Greg Valentine called it in the ring for almost the entirety of his career. His skill and attitude made him one of the top heels in wrestling, whether as a part of a tag team or solo act.

“You can always judge a man by the quality of his enemies.” –Oscar Wilde

If that quote is true, WWE Hall-of-Famer Greg Valentine’s status as a performer inside the squared circle is unquestionable. Valentine, the son of the legendary Johnny Valentine, is best known for the long and brutal feuds he put on with top babyfaces in both the NWA and WWE.

Born Jonathan Anthony Wisniski, Jr., the younger Valentine didn’t immediately capitalize on his father’s name. Instead, Greg got his start training in Stu Hart’s dungeon, in addition to timely advice from his father.

“Really, listening to my dad and watching him was very important to me as I was about to break in,” Valentine said during an exclusive interview with ProWrestlingStories.com. “He knew what to do and when to do it, and he was incredibly tough, so I learned just by being around him … the Dungeon was different. It was just a basement in Stu Hart’s house with wrestling mats on the floor. If Stu got ahold of you, he’d try to make you scream.”

Greg Valentine is one of several veteran superstars appearing in the upcoming 350 Days documentary, which details what it was really like to live life on the road as a professional wrestler in the 1980s.

350 Days is in select movie theaters across the US on July 12th, 2018 only. Be sure to grab your tickets here if you haven’t already!

Related: 350 Days: The Story of Wrestling, Sex, Drugs, and Rock-n-Roll

Valentine started out as “Babyface Nelson” before getting an early opportunity to work as one of the Fabulous Fargo brothers, teaming with Don Fargo from 1971-74. Working in Cleveland, Ohio, and Buffalo, New York, the Fargo “brothers” would cut a swath of destruction. And all the while, Valentine was learning.

“Don was good because he could lead the match while I was learning in the ring,” Valentine said.

When he was ready to fly on his own, Valentine went to Florida and changed his ring name to Johnny Valentine, Jr., but soon scrapped the name. His father was still working, and promoters were afraid that the name would imply the elder Valentine was too old to be in the ring. Soon, he found the moniker that stuck: Greg “the Hammer” Valentine.

A word about “the Hammer”: Valentine’s finishing move was the figure-four leglock. But his stiff style had earned him the respect of fans and other wrestlers, and the clubbing elbow drop from Valentine was dubbed “the Hammer” for how hard he seemed to be hitting people.

“I was pretty snug,” Valentine said. “I never wanted anybody to be able to see through any of my stuff, so when I threw something, I threw it hard. People were able to believe in what I was doing.”

With a growing reputation as a tough, hard-nosed wrestler, Greg Valentine went into Jim Crocket Promotions in North Carolina and was teamed with another promising young heel: Ric Flair.

The Nature Boy had already been part of a successful team with Rip Hawk, but the young team of Greg Valentine and Ric Flair was soon over with the crowd as well, winning the NWA Mid-Atlantic tag titles, as well as the world tag team championship twice.

“Oh, Flair was great,” Valentine said. “We had really good chemistry as a tag team. Both of us were young guys and we were working hard every night. There was so much talent with Crockett. Like Ricky Steamboat–he was tremendous. I never got to work a program with him, but we had some house show matches, and he was terrific to work with. Just a tremendous babyface.”

Valentine and Flair worked a brutal feud with unlikely babyfaces, Ole and Gene Anderson, trading the world tag titles back and forth, until they were stripped of the tag team titles by then-NWA president Eddie Graham for “unprofessional conduct” in an angle that explained Flair breaking off to pursue the world championship. Valentine again won the world tag titles, this time with Baron Von Rasche.

By now, Valentine was ready for his first marquee singles feud, taking on Wahoo McDaniel and, in a memorable angle, “breaking” Wahoo’s leg.

“Wahoo was a tremendous athlete,” Valentine said. “His legs were so thick that I couldn’t get the figure-four on him, so I kind of scissored his leg and fell backward, and that worked.”

For weeks afterward, Valentine wore a T-shirt during all of his appearances that read: “I BROKE WAHOO’S LEG” on the front and “NO MORE WAHOO” on the back.

“[Wahoo] was rough,” Valentine said. “But he liked it if you gave it back to him, he respected you. I made sure he respected me!”


Shortly after this angle, Valentine started doing shots for the WWWF (the precursor of today’s WWE) as a wrestler who broke the leg of each opponent.  Just like with Wahoo, Valentine did an angle with the territory’s No. 2 babyface, Chief Jay Strongbow, where he broke Strongbow’s leg. He eventually challenged WWWF champion Bob Backlund in Madison Square Garden, going to a one-hour draw.

When he returned to the Mid-Atlantic territory, his work against Wahoo and later in the WWWF had “made” Greg Valentine as a main event-level heel. He worked a long and brutal feud with “Rowdy” Roddy Piper over the territory’s top title, the United States championship. The brutality of the feud was brought home during the first Starrcade in 1983, when Valentine and Piper worked a “dog collar” match, with each man chained to the other by the neck. Piper won that match–non-title, since it wasn’t officially sanctioned by the NWA–but Valentine got his heat back by beating Piper down afterward and leaving him laying in the ring.

Then Vince McMahon came calling. McMahon was expanding his father’s old territory, planning to take his promotion national. Valentine agreed to a deal, and less than a month after Starrcade, Valentine dropped the U.S. title to Dick Slater and left for New York.

Greg Valentine on the fate of the Intercontinental Title Belt he destroyed after losing to Tito Santana in July, 1985

It was in the WWF that Greg Valentine rose to his greatest fame, defeating Tito Santana for the Intercontinental title in September of 1984, kayfabe injuring Santana’s leg with the figure-four. Valentine found himself the No. 2 heel in the company, just as he had been for Crockett. But this time, the company was much bigger. Holding the IC title at that time meant that Valentine was–to a large portion of the US audience–the second-best wrestler in the world.  He defended the title against the Junkyard Dog at the first WrestleMania, taking a count-out loss and keeping the championship. But the feud with JYD was just to keep him busy until his feud with Santana resumed. And at this time, the title was a coveted item. The championship belt had undergone a makeover from the days of Pedro Morales and Don Muraco, but with national expansion, McMahon again wanted something new, an even sharper image for the championship.

So when Greg Valentine and Tito Santana met on July 16, 1985, in a steel cage in Baltimore, Maryland, it was a perfect opportunity to put the belt out to pasture. While Santana got the victory to reclaim the title, Valentine retrieved the championship and destroyed the belt, beating it repeatedly against the cage and tearing the gold away from the leather. Shortly thereafter, the WWE awarded Santana a new belt, the iconic Intercontinental design still in use by the WWE today.

“I had to give the belt back to Tito after that angle,” Valentine said. “And one day when I saw him a few years ago, I asked whatever became of that belt, because Tito kept it after that angle. He told me his wife threw it out! Do you know how much money I could have made with that belt now?”

Valentine works a lot of autograph and convention shows these days.

“Don’t you think people would have paid for a picture with that belt?” He laughs, but it’s easy to see he’s only half-kidding.

Valentine then found himself in an interesting position. Just as Don Fargo had been his mentor early in his career, Valentine was teamed with Brutus “the Barber” Beefcake as a top heel team in the company, defeating the U.S. Express of Barry Windham and Mike Rotundo for the WWF world tag team titles in August of 1985 and holding those belts until losing them to the British Bulldogs at WrestleMania II in April of 1986.

Working with the Bulldogs could be a challenge, because–especially at the time–they were one of the newer breeds of teams who wanted to plan spots out in advance. Valentine, with his work ethic and history in the business, just wanted to go out and call it in the ring.

“I didn’t call spots with those guys,” he said. “First, I thought Brutus was very good. He was better than he gets credit for being. But if the Bulldogs wanted to work spots, they would get with [Brutus] to do it, because I wasn’t going to. I’m the heel, and I’m the veteran. I’m going to lead the match, and I just don’t work that way.”

Valentine wanted to wrestle. He didn’t care for a lot of the ga-ga that the WWE was putting on TV at the time. In fact, he once resigned because the WWE wanted to involve him in an angle where Valentine and Dino Bravo would “kidnap” the Bulldogs’ mascot, Matilda.

Eventually, Greg Valentine would be brought back, but he was moved down the card, even though he still had entertaining feuds with Don Muraco and Ron Garvin. Ask him about the 1980s WWE wrestling scene, and Valentine will tell you that life on the road was difficult, but the money often made up for it. There were weeks when Valentine was bringing home $20,000 a week in the ’80s.

“Back when I started (with WWE), they were paying us in cash,” he said. “It was just incredible how much you would get paid and then you had all of this money on you. Later on, of course, they started paying by check, and that was kind of–I don’t know. It was different. Jim Crockett always paid by check, but in the early WWF, they always paid cash. I don’t know about you, but give me cash every time!”

These days, Valentine still wrestles fairly regularly while also working the convention and autograph circuit. And despite working heel for almost the entirety of his career, Valentine has a smile and friendly word for everyone.

“I think folks are surprised when I’m nice,” he said, laughing. “Of course, my wife says I’m too nice.” 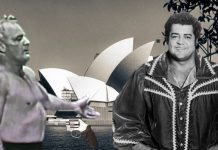 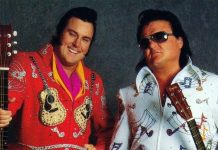 Honky Tonk Man and Greg Valentine | Rhythm and Blues (and Unkept Promises, Too!)

The Night Blackjack Mulligan was Nearly Murdered in the Ring