This is the story of the legendary Sid Vicious Squeegee Incident involving Brian Pillman and Mike Graham. It is a tale that has become legendary over the years due to its absurdity!

What Led to The Squeegee Incident?

On October 12th, 1991, WCW had a house show at the Omni Coliseum in Atlanta, Georgia. In a rare instance, the then-WWF was set to have a house show at the Omni the following night. As both companies were in town for shows one day apart, it provided the unique opportunity for talent from both companies to get together and catch up over drinks at the Ramada Plaza Atlanta Airport hotel.

Two months earlier, in August ’91, Sid Vicious switched from WCW to the WWF. Now known as Sid Justice, he began bragging to his old colleagues from WCW about how much better things were in the WWF and how dreadful WCW was. This naturally rubbed some people the wrong way, and as alcohol was involved, tempers began to flare.

Mike Graham, who was being used as both a mid-carder and backstage road agent in WCW at the time, asked Sid to shut up, to which Sid replied by saying he had drawn more money in the past week than Graham made his entire career.

Recommended read: Eddie and Mike Graham – Years after Their Deaths, We Still Ask: Why?

Before fists were raised between the two, Sid turned to Brian Pillman, who was sitting nearby. Sid told Pillman that one of the reasons WWF is better than WCW is that they are more convincing to the audience and that they don’t let smaller guys do programs with big guys. This was in reference to the program booked in WCW earlier in the year between Sid Vicious and Brian Pillman that stemmed from War Games ’91, where Sid intentionally injured Pillman in a powerbomb spot inside of the cage. Sid also made the mistake of telling Pillman that he will never make it in the business because he’s just a pretty boy who doesn’t know how to work.

Pillman was angered by this comment and approached Sid angrily. According to witnesses present, before punches could be thrown, Sid backed down, stating that he just suffered a bicep injury and didn’t want to aggravate the injury by fighting. To prove his case, he pulled up his shirt to reveal a bandage. He then left the bar, and everyone thought it was over. They were wrong.

Sid Vicious Returns to Fight Brian Pillman and Mike Graham with His Weapon of Choice: a Squeegee!

Still reeling from the events that just took place, Sid left the hotel to look for a weapon. He couldn’t find one, so he settled on a squeegee, the tool you use to wipe the water off your car windows at a gas station or bathroom walls after a shower.

Sid returned to the bar holding the squeegee like a prized weapon, challenging Brian Pillman and Mike Graham to a fight. Without hesitation, Graham grabbed the squeegee off him. Sid began throwing harsh diatribes his way while people held Pillman back from going after him. Sid soon left the bar, this time for good, leaving Brian Pillman and Mike Graham to be treated as heroes in the WCW locker room due to how they backed down a man twice their size.

Sid Vicious Opens up about The Squeegee Incident

"I was with the WWF at the time," he began. "I had torn my bicep that night in Orlando, Florida, and I hadn’t left my car at the HoJos (Howard Johnson hotels) that everybody was staying at. I was sitting there talking to [a few people] — and actually, that night, Magnum TA and a few others were trying to talk me into coming back to WCW. I was just telling them how great things were [in the WWF]. Brian Pillman started running his mouth, and I said, ‘Hey, fuck you!’"

Sid continued, "I had a torn bicep, and I couldn’t have fought if I wanted to. So I just remember getting up, my car was dead, a guy was giving me a boost, and Pillman was out there. It just so happens that [a squeegee] was in the floorboard next to the passenger seat, and I grabbed it and said, ‘Hey, motherfucker. Do you want me to whack you in the motherfucking head with this?’ Of course, he didn’t."

On whether or not the squeegee incident story that goes around is exaggerated, Sid replied, "Yes, of course. If Brian Pillman wanted to be a tough guy when I beat him up that one time at War Games legitimately when we were inside of that cage, he had all the reason he could have had to fight me right there, but he didn’t. He didn’t want to fight."

Many in the back had wondered if the powerbomb spot at War Games ’91, where Sid dropped Brian on his head, was purposely done as the two were not getting along at the time due to Pillman refusing to take his finish.

"That was done purposely," Sid admits. "I sent him through the cage and had him hit his head. All the babyfaces hated working with me in the northeast because they got booed. So we were in Meadowowlands one night, and he didn’t want to take my finish, and Magnum [TA] said, ‘No, you’re going to take the finish.’"

"I heard the story from Graham and Pillman both," Prichard explains. "Pillman much later when Pillman came to work for us several years after that, but in that very bar – in the Ramada Bar – Mike Graham told me the story of what had taken place. I’ve heard Sid’s version, but through other people – not directly from Sid. Sid’s version was that he was injured and just had this surgery done, and they were all popping off to him, and he popped off to them, and it was two against one, and he was gonna defend himself, hence the squeegee."

Prichard continues, "From Mike Graham, Sid was sitting there telling them everything that was great about WWF and everything that was wrong with WCW, and Graham told me he told him, ‘Just shut the fuck up, Sid.’ They got into a little verbal thing, and Pillman got into it verbally back and forth. Pillman stood up and said, ‘Let’s do something about it.’ They all got in between them. Blah blah blah. Sid left; they thought they were done with him. He came back with the squeegee, and as Graham said, ‘I went up and ripped the squeegee out of his hand and told him I was gonna shove it up his ass if he didn’t get out of there.’ That was the Mike Graham version, straight from Mike Graham’s mouth, from me, sitting at that very bar at the Ramada, at the airport, not long after it happened."

Sid Vicious would later return to WCW in May of ’93, and there were no further problems between him, Brian Pillman, or Mike Graham. However, a much more notorious fight with Arn Anderson involving a pair of scissors would occur two years later! 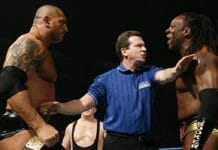 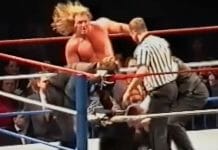 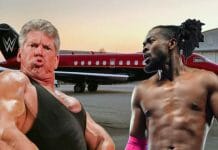