Owen Hart was highly regarded as one of the most fun people in the locker room and on the road. In this piece, his brother Bret Hart, Triple H, Scott Hall (Razor Ramon), Jim Ross, and others share tales that reveal exactly the kind of man Owen was.

“My WrestleMania X match with Owen was a really special match we put together that day,” Bret Hart recounts. “Too many people today don’t realize how hard it is to put together a match like that – and even though we were brothers, it was the first time we ever wrestled each other in a singles match.

“To go out there and wrestle that kind of match says a lot about the skill and the wrestling psychology that we both had.

“I had some great moments with Austin at WrestleMania, but the one with Owen, that was more special because of everything we’d been through growing up as kids.

“There were a lot of funny ironies that came out during that brother versus brother shoot that we had because we talked about how I used to save him at school…well, I did save him at school lots of times. We had these moments in our interviews where the things we said to each other were kind of true. I always looked after him and protected him, and I remember beating up a bunch of guys at school who were picking on him.

“He started telling one story that I didn’t even remember about how I saved him from a teacher.

“You see, we used to have to walk to another school to catch the school bus, and he was waiting at this other school for his ride.

“This teacher from the other school came up and started chewing Owen out for some reason, and the teacher grabbed him like he was going to send him into the office. I got into the face of the teacher and saved Owen.

“This all came out when we were trying to put together all our memories and stories when we were doing our interviews, and we tried to insert them into the reality of the wrestling story.

“It was a lot of fun wrestling Owen, and when I look back on it now, WrestleMania, Madison Square Garden, winning the World Title and wrestling Owen that day, that’s as big of a highlight as I can have as far as WrestleMania goes.

“He would prank wrestlers all the time.”

“I can remember he used to get Mr. Fuji…he’d call his hotel room from the lobby with this kind of punk kid voice and challenge him, call him a bunch of names on the phone, ‘Come down an’ I’ll kick yer ASS!’

“I can remember Fuji wandering around in his kimono at about three o’clock in the morning. [I asked him] ‘What are you doing..?’

“He’d be half asleep and all worked up. ‘Some kid called me and told me to come down…he said he was gonna kick my ass!'”

“During Easter 1994, I was WWF World Champion, and I was in Jerusalem.

“For a main event tag team match, I teamed up with Razor Ramon against Shawn Michaels and Owen.

“The crowd was filled with Palestinian and Israeli kids, teenagers, and younger, many of whom were wearing Hitman sunglasses and tee shirts. I could tell going into the ring that Owen was up to something.

“He had a smirk on his face that he couldn’t wipe off.

“As soon as the match started, Owen set about cracking me, Shawn, and Razor up – and he wasn’t concerned about if anyone in the audience was aware of it or not.

“While he wrestled, he walked around with ridiculously exaggerated dinosaur steps. I can remember Razor Ramon holding Owen in an armbar on the mat and Owen going through the motions of casually pretending he was smoking a cigarette. Razor tried to pick Owen up, but Owen was flat on his back and went dead weight like a 220-pound starfish. As hard as Razor tried over and over, he couldn’t budge Owen as Shawn and I nearly fell off the corners of the ring laughing.

“Owen proceeded to take the most absolutely phony, cartoon-like bumps all over the ring. He seized a hapless Razor in a bear hug, which looked more like a romantic embrace. From there, he eventually wound up on the ring floor with Razor, where he acted like a complete lunatic and began choking Razor with a microphone cord.

“Little did Razor know that Owen had completely tied him up like a rodeo calf from hoof to head and climbed back into the ring, leaving Razor leaning there completely entwined!

“If it hadn’t been for Shawn, that would have been the end of the match right there.

“Under the guise of beating Razor up, Shawn somehow got Razor untied without the crowd noticing.

“Razor tagged me in to a big pop, and I ended up getting the win with the sharpshooter – Owen was laughing so hard I could barely turn him over! It struck me at that moment that the crowd was having an even better time than we were…"

“Probably not a month goes by, all these years later, that somebody doesn’t still tell a funny Owen Hart story.

“But he was a good friend to a lot of the guys, very funny, always playing a joke on somebody…

“In many ways, he and Bret had a lot of issues with each other, business-wise, because he didn’t take things too seriously, [whereas] Bret took it SO seriously…

“I’ve been in the ring with Owen, and he was an unbelievable talent. So much so that sometimes he would go out and have a bad match on purpose to make himself laugh. He would think it was funny.

“Owen saw this just as a career where he could make some money, take care of his family. Then he was done with it.

“And being a top guy required a lot more commitment time-wise, responsibility-wise. You know, it’s a lot more than they just give you [the belt] and say, ‘Just do what you’ve been doing…’

“But it doesn’t change the fact that he’s one of the best guys I’ve ever been in the ring with. Owen was an incredible performer.” 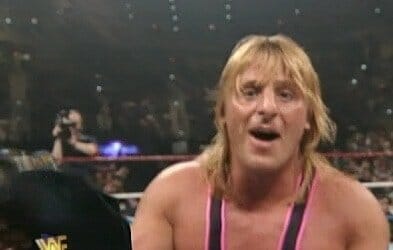 Jim Ross once said, “I was having a long day talking with someone with substance-abuse issues. Owen saw that my door had been closed for several hours. [As I headed to the arena to commentate for the TV broadcast], I catch him coming down the hall, stumbling, bouncing off the walls.

“I get up close to him; he’s got this white substance under his nose like he’s been doing cocaine. Obviously, Owen was not a drug user at all. Long story short, he’d gone to the dessert table at catering and got a powdered doughnut, trying to cheer me up and say, ‘You had a rough day. A lot of us are appreciative of what you’re trying to do to help guys.’” 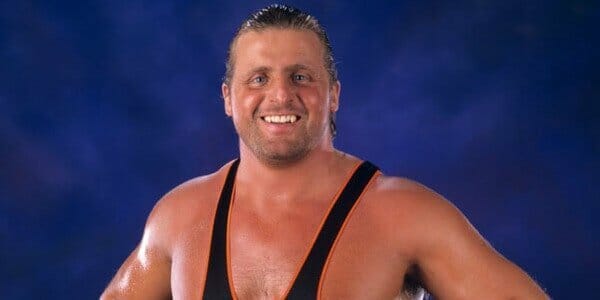 “There was one time when we watched Owen, he had a driver, and he was in the passenger seat, and Jeff Jarrett was in the backseat behind Owen,” shares Val Venis.

“As they were going up the ramp to drive out from the bottom of the arena, all you heard on the top of the roof of the car was, ‘Whack!’

“Owen looked over to the driver and said, ‘That guy up there just threw a rock down on your car!’

“So, the guy stops the car on the ramp, gets out of the car, runs up the ramp, runs around the rail, and charges at the guy Owen pointed at.

“Well, a cop steps out in front of the driver and says, ‘Whoa, this guy didn’t throw any rock, the guy with the blonde hair in the car hit the roof of your car with his hand!’

“When the driver looked over the rail to look at Owen, Owen turned around and said, ‘Jeff, why did you hit the top of the car?’ and put all the heat on Jeff.”

For more stories showing the heart and humor of Owen Hart, be sure not to miss the recommended book, Owen Hart: King of Pranks: The Ultimate Anthology of Owen’s Greatest Ribs, Pranks, and Stories, by James Romero.

Sources used in this article: ESPN, Calgary Sun, mirror.co.uk, Wrestling with Rosenberg (2008), The Province, and Inquisitr.com, with some quotes compiled by Matt Pender and shared here with thanks to our friends over at ‘Wrestling’s Glory Days’ Facebook page.