The father of Mad Dog Vachon saw his son’s shootfighting ability from a young age and did everything he could to foster his son’s skills and aggression in a positive way. That’s not to say there weren’t fights along the way! From taking on schoolboys to discovering professional wrestling off of the advice of a mafia godfather, Vachon’s story is quite a tale.

The Life and Times of Mad Dog Vachon

Joseph Maurice Régis Vachon, best known by his ring name Mad Dog Vachon, was a Canadian professional wrestler and 36-year veteran. He was the brother of wrestlers Paul and Vivian Vachon and the uncle of wrestler Luna Vachon.

An exceptional grappler and an accomplished freestyle wrestler to boot, at age 18, he beat the then-champion out of India in 58 seconds at the 1948 Olympics.

He ranked 7th place overall during those Olympic games and lost against the eventual silver medalist. It was at these Olympic games where Vachon had a chance encounter with American Greco-Roman competitor Verne Gagne.

In 1950, Vachon bounced back and earned a gold medal at the British Empire Games in New Zealand.

Before joining the pro wrestling circuit in 1951, he spent several years working as a bouncer at a Montreal nightclub where he gained notoriety to fight anyone.

Breaking into the Business of Professional Wrestling

From the Wormwood Chronicles, Mad Dog Vachon shared the fascinating story of how his toughness and tenacity helped him become involved in wrestling:

“My father was a policeman in Montreal; he was a constable. Every day I went to school, and the kids in school can be cruel to one another. They used to call me ‘Vachon, cochon, Vachon, cochon…’ Cochon means “pig” in French. You know what I mean?

“I would get into fights and come home from school with my white shirt from Catholic school all messed up with blood. My father would look at my shirt and yell – he had a voice twice as strong as mine, you know – ‘Maurice, you’ve been fighting again!’

“One day, he took me to the YMCA in Verdun, which is a suburb of Montreal. He said I was always fighting in school. My dad was crazy about boxing and wanted me to be a boxer. The officer at the YMCA told my Dad there was no class for boxing there.

“He said, ‘Why don’t you take him downtown to Drummond Street to the Central YMCA? Maybe they have boxing classes down there.’ So he took me over there, and the first guy my dad talked to over there was Frank Saxon, the wrestling coach.

“He says, ‘Mr. Vachon, I don’t recommend boxing for your son. In a few years, he’ll be punch drunk from all the blows to the head. Why don’t you bring him down here, and we can teach him wrestling? Who knows, someday he might be good enough to wrestle in the Olympics!’

“There were no classes anywhere in Canada for kids my age, but they made an exception for me. So I was the only one who was 12 years old who was doing that kind of wrestling in the whole country.

“It took me 9 days to get to London from Montreal by boat. Today, if people take 9 hours to fly, they complain.

“I’m very proud of my past in amateur wrestling. I did my share; I paid the price.

“I was a bouncer at a nightclub in Montreal for a long time. Many people came to try me out and see how tough I was like I was the fastest gun alive. I beat the shit out of some guy and one day, a guy who used to be a pro wrestler named Armand Corvelle, who wrestled in the days before TV, saw me.

“Armand Corvelle was a consigliere for a local godfather in Montreal by the name of Vic Cattrone. Cattrone was also a wrestler before he became a godfather. Armand said, Maurice, I want to take you out for dinner sometime next week.

“He talked to me and said, ‘Maurice, you’re a nightclub bouncer in Montreal, and everybody’s always coming after you. So far, you’re on top…but one of these days, somebody’s going to pull a gun on you and shoot you in the head. I recommend that you quit the bouncing job and go into professional wrestling.’

“I took his recommendation…”

The Antics of Mad Dog Vachon on the Road

In a Spotshow Wrestling interview with Bobby Heenan and Jim Cornette, Heenan shared just how short a fuse Mad Dog Vachon had!

“You know what Dog told me? He says, ‘I love my name. Do you know what it is spelled backward?’ (laughs)

“So we’re at the bar, and this drunken Canadian mark comes up to us, and he wants to fool with Watts! Of course, they always pick the biggest guy. Watts had this big old cowboy hat on and looked like Cowboy Freddy from Omaha Tuesday, a kid’s show.

“So he starts messing with Watts, and somehow he gets into it with Mad Dog! So Mad Dog goes to the guy, and the guy moves, and Mad Dog cracks his head on a wooden post in the middle of the bar. His head just opens up, no blood! Just a red crease in his head! And Dog turns to the guy, and he says, ‘Now we’re going to have some fun!’

“He gets the guy down, he reaches in, and he starts pulling the guy’s eye out! And Butcher, his brother, tries to pull him off. They finally get him off, and Dog was just biting the guy [on the face]. It was like something you’ve never seen.

“The guy behind the bar says, ‘I wonder what would have happened if he messed with the big guy!’ (laughs)

“We were in Denver one night and went out to eat. We were at this spot, kind of like a Denny’s.

“Mad Dog is sitting at the table by himself, not bothering anybody, and some guy sits down with him and says, ‘Maurice Mad Dog Vachon. Can I talk to you for a second?’

“The Dog looks at him and says, ‘You are about to make the biggest mistake of your life!’

“He wipes off his fork, and the guy leaves.

“The guy goes across the street where four of his friends are waiting for him. So Mad Dog calls his brother Paul and tells him, ‘I’m at this restaurant down by the Riveria Hotel. Drive down to meet me. We’re going to have some fun!’ So Paul "Butcher" Vachon gets in a cab and heads down there.

“Paul was the real big one, but Dog was the killer.

“So the Dog walks outside the restaurant and goes across the street to the group of guys so he can walk through them. One guy stops him and says. ‘Do you have a light?’ So Mad Dog reaches in his pocket to act as if he’s going for a light, and picks the guy up like he was going to body slam him and starts running with him, trying to throw him through a plate-glass window.

“So Paul finally arrives, and there are bodies all over the place, and it looks like Beirut – and Mad Dog tells Paul, ‘I’m sorry you missed out on your fun!’

“Mad Dog Vachon was a dog. He was an animal!” 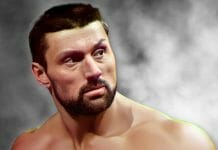