Kurt Angle and Eddie Guerrero were like brothers outside of the ring, and as brothers do, they are going to fight from time to time.

In 2004 when the pair of them were feuding on-air for the WWE Championship, a planned on-air beatdown of Eddie involving Mark Jindrak, Luther Reigns, and Kurt Angle went a bit awry, and a few potatoes (connecting punches) were thrown. Eddie was none too pleased, and when Kurt went to the back to thank him after the segment, things kicked off for real.

What Set Things Off Between Kurt Angle and Eddie Guerrero?

“That car accident really inhibited what he could do after that,” Kurt explained. “In other words, he had limits. He could still do a lot, but not like he used to.”

Angle continued, “I used to watch him in WCW and would go, ‘Wow! This kid’s incredible!’ But he almost couldn’t walk again after that accident. Eddie was banged up when I wrestled him. You could tell by the way he bumped. He would bump really hard like a big man. It seemed like he was always hurting. You would see him earlier in the day, and he looked like an old man, you know? It was like he’s still that good despite being banged up the way that he was. I just couldn’t imagine wrestling Eddie in 1998.”

According to Kurt Angle, he had one of the best matches of his career against Eddie Guerrero at WrestleMania XX but admitted that he always wondered what it would have been like to wrestle Eddie in his prime.

“As good as he was in 2004 and 2005, he had to have been ten times better [in WCW]. That’s mind-blowing! He could have been the absolute greatest of all time. When I wrestled him, he was still in that top 3. Eddie had it all. He was so entertaining, but he had all the technique, too. He was just such a great wrestler. He got finishes, and he knew how to structure [a match].”

Due to physical limitations caused by that fateful car accident in 1999, Eddie Guerrero was unable to show the same kind of physicality in the ring that he once could. This bothered him, and it wasn’t rare for him to go off on people backstage when things went amiss in the ring.

“The night I got into a fight with Eddie, oh, God. When Eddie snapped, he flicked a switch. And that’s the problem. When Eddie got mad, you couldn’t change his mind. He was going to get pissed, he was going to cut a promo on you, and he would tell you like it is.

“The problem is, we had to jump Eddie out in the ring, but I didn’t touch him. We had these two big goon guys- Mark Jindrak and Luther Reigns. They were beating the hell out of Eddie, right? And we got heat on him to end the show, and I was waiting in the back because I wanted to thank Eddie, but remember, I didn’t touch him. He comes straight up to me, and he blames me for it! I said, ‘Woah, I didn’t touch you!’

“This is like the fifth time he had confronted me in the past month, so I shoved him. I just wanted to see what he would do. And he didn’t do anything, so I shoved him again and he double-legs me. He could have sucker-punched me, but he double-legged me! I thought, ‘He did not just double-leg an Olympic gold medalist!’ (laughs)

“So I laid the hips into him, and I started choking him out nice and slow.

“I mean, he made me feel like an eight-year-old kid! I was pissed! I was like, ‘Don’t you ever, ever grab me by my singlet and pick me up and walk me across the room like that!”

“It was really embarrassing, but that’s how strong Big Show was.”

“You know Eddie has a temper,” Angle confessed, “so five minutes after my fight, I walk over to him, and I say, ‘I’m sorry, Eddie. I’m sorry for what happened.’ And he goes, ‘I’m not ready yet!’ Oh, God!

“So I said, ‘You what?’ and he goes, ‘I’m not ready to be sorry,’ so I pushed him again! I wanted to fight this poor kid, but he didn’t want to double-leg me again, so he was just standing there, and JBL got in between us.

“I tried to call him that night, but he wasn’t ready again, but finally, one week later, he came to me and apologized.”

How Did Things End Between Kurt Angle and Eddie Guerrero?

“Eddie and I were brothers,” Angle admits. “My brother Eric and I, we fought all the time, so I didn’t mind. I knew Eddie was very much like my brother Eric. He had a temper, and he was going to let it fly every once in a while, and we would get over it. And we did. Eddie got mad at me a million times, but knowing he was just like my brother, Eric, okay, we can forgive each other the next day and move on, but the whole, ‘I’m not ready yet, it got to me, man! I wanted to kick his butt!” (laughs)

“It was a short skirmish, and Eddie got upset,” Prichard recalls. “Kurt and Eddie had been out in the ring beforehand, and, man, if Kurt Angle wants to take you and do something with you, he’s going to do it. And Eddie was a little pissed off because Kurt wasn’t listening to him. They came back, and Eddie was pretty upset. Eddie attacked Kurt, tried to double-leg him, and take him down, and Kurt just front face-locked him before they were pulled apart very quickly.”

“JBL said, ‘Eddie, he’s an Olympic gold medalist. What the fuck were you thinking?’ and Eddie just kind of putting his head down, like, ‘I know, man. I’m just so stupid!’ But that was it, just two guys pretty heated after a match, and Eddie trying to double-leg Kurt and Kurt wasn’t going anywhere.”

When it comes to brothers, a wise unknown author once said, “They’re not fighting, they’re just expressing their love for each other through a bit of physical violence!” The same could easily be applied here with this story. 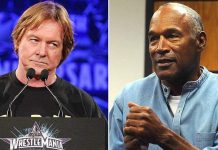