Bret Hart, never one to hold back his thoughts, shares the unfortunate story of the time Ultimate Warrior let a Make-a-Wish kid down on one of his final wishes. Although this story doesn’t paint Warrior in the most favorable of lights, he did his best to redeem himself and make amends with many during his final days. This story comes from Bret Hart’s autobiography, ‘Hitman: My Real Life in the Cartoon World of Wrestling,’ one of the best wrestling autobiographies out there.

Here is what Bret Hart had to say about the Ultimate Warrior and a Make-a-Wish Kid:

“I got to see exactly what kind of champion Warrior was during a show in Omaha. Propped up on a stretcher a few feet outside of the dressing room was a Make-A-Wish kid who looked to be down to his last few hours. There was not a hair left on his head, and not even his Warrior face paint could mask his sad eyes. Sickly pale and barely breathing through a ventilator tube, the boy wore a purple Warrior T-shirt and green and orange tassels tied around his biceps to honor his hero. His mother and father and an older brother and sister were with him, patiently waiting for the promised encounter with The Ultimate Warrior.

I bent over to say hello, as did all the other wrestlers on the way into the dressing room. It was odd, but there was Warrior actually sitting with us: He usually kept to himself in his private dressing room. By the time the third match started, a WWF public relations rep poked his head in and politely asked Warrior if he was ready to meet the dying boy. Warrior grunted, “In a f****n’ minute. I’m busy.” I thought to myself, Busy doing what, talking to a bunch of guys you can’t stand anyway?

As the night wore on the family waited just outside the dressing room door, the boy hanging on to his dying wish to meet his hero. As I was returning to the dressing room after my match, I was relieved to see that they weren’t there anymore; I assumed that the kid’s wish had come true.

Warrior’s entrance music played while Jim and I quickly showered in hopes of beating the crowd out of the building. We’d have to hurry since Warrior never went over ten minutes. We dressed, grabbed our bags and took off. As we rounded a corner down a backstage ramp, we came upon the boy and his weary family, who had been moved there so as not to get in the way of Warrior’s entrance. I thought, That lousy piece of s**t. He’d made them wait all night, unable to summon the compassion to see this real little warrior. Hogan, Randy, and countless others, including André, never hesitated to take the time to meet a sick, dying kid. My disgust for Warrior magnified a thousand times. To me, he was a coward, a weakling, and a phony hero.”

BRET HART: Revealed! A Tell-All on Man Who Wore Black and Pink

SCOTT HALL on BRET HART’s Shrine to Himself 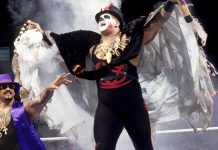