November 23rd, 1991, marked a day many pro wrestling fans tuning into WWF Superstars of Wrestling collectively shrieked, ‘Holy s#@t!’ at their television screens. On that day, an infamous snake bite incident occurred between Randy Savage and Jake Roberts. You may have seen the footage, but it’s what took place before the cameras started rolling that makes this incident all the more entertaining!

Jake Roberts and His Snakes

Jake Roberts made a name for himself by bringing snakes along with him to the ring.

In his first pay-per-view appearance with the then-WWF at WrestleMania 2, he memorably made his opponent George Wells foam from the mouth when he wrapped his snake Damien around Well’s head.

This snake gimmick was a huge success, and Roberts used reptilian counterparts as part of his wrestling persona from then on out. Oddly enough, Jake wasn’t even fond of snakes!

How did this unlikely bond with snakes come to be? On the Jake The Snake Roberts: Pick Your Poison DVD, Jake Roberts explains:

“I hated the sons of bitches. I’m terrified of them!

“But in Mid-South, I came up with the idea to use one. I thought, ‘Jake ‘The Snake’? It kind of fits. (laughs)

“Then Bill Watts was quick to tell me that ‘this isn’t a damn circus.’

“‘We’re not going to have any circus clowns or circus geeks carrying snakes!’

“Gee, he was so right. What a stupid idea… (laughs)

“They [WWF] had come back with it. They said, ‘Have you thought about this before?’

“Next thing you know, I’ve got a damn snake.

“There was a guy in Stamford, Connecticut named Albert that supplied all the snakes.

“What a miserable damn job that was, carrying my wrestling gear and clothes — and a 100-pound snake in a box! Walking around with 150 pounds of gear, that’s not healthy to do, really. Really, really brutal, man. It really tore my ass up.

“Back then, we’d go on the road for a month to six weeks at a time.

“You wake up in a hotel room at 5 AM — there are no bellmen at the Red Roof Inn. You’ve got to do it yourself.

“Then you get your rental car, and you’ve got to turn that back in. So, you’ve got to take all that shit back out and put it on the bus to the airport.

“Then, when you get there, you’ve got to carry it all the way over to the skycaps — IF they are available because a lot of airports didn’t have skycaps.

“I wasn’t all jacked up and juiced up.

“The one time I did go up – to about 275 pounds – it was after my neck surgery. I got juiced and jacked because I was trying to get myself over the neck surgery.

“I went in after the neck surgery to see Vince, and he goes, ‘That’s not what we want.’

“I said, ‘What are you talking about? This is not what you want?’ Because I had really put on a lot of beef on my upper body.

“He said, ‘You know; if we wanted Hogan to carry a snake, we’d have Hogan carry a snake. We don’t want you looking like that. We want you to be very sensuous, very sexual, smooth. Be different…’

“He told me that he didn’t want to hear about me being in the gym. So, I went home and sat by the pool for a month, snorted cocaine, and drank! (laughs) So, there you go…

“Then I got the cobra. I loved that damned thing. Oh, I loved him. He only weighed about 15 pounds. And it got a lot more respect! (laughs)”

While Jake Roberts grew to love his snakes, other wrestlers didn’t share the same fondness towards them.

But if you’re fond of Jake and his snakes, be sure to show you’re a true fan with a comfortable Jake the Snake tee. Be sure to use code "PWS" for a pleasant surprise.

There are many classic Jake Roberts snake moments that come to mind, but one of our favorites was the legendary snake bite angle with "Macho Man" Randy Savage that aired on WWF Superstars of Wrestling on November 23rd, 1991.

Here is what the two had to say about this incident:

"Savage came up to me before and said [Macho Man voice], ‘Your cobra’s gonna bite me – Okay, you got that? But here’s the fuck-enn problem, yeah… there’s a lot of people around here that’d like to TAKE the Macho Man OUT – you know what I’m sayin’? And you might be one of them…’

I said, ‘What are you talking about?’

He said, ‘I want to fuck-enn know… if the thing’s got the fuck-enn’ gimmicks out…’

‘Then you don’t miiind if it bites you FIRST…’

He takes me to the locker room. I sit there, put it up to my leg, right? It chews on my leg. Then, it released.

Thirty minutes later, [jumps in close] ‘How you doing, Snake Man-? That botherin’ ya..?’

"We were driving to Indianapolis, and I was in the backseat, pretending to be asleep when Randy and Elizabeth started fighting.

Elizabeth didn’t want Randy to get bitten by the cobra that night at the Market Square Arena. And Randy said the snake was de-venomized — Jake had told him so — and he was going to let the snake bite him because it was good business."

"The snake was supposed to be de-venomized. But when the python bit me, oh my god… (laughs) It wouldn’t let go…"

"I’m trying [to pull it off] — I’m trying! And the snake’s just gnawing on his arm. It’s going on for like a minute now, you know? Over a minute, damn…

"My arm blew up like a balloon for days. About five days later, they had to rush me to the hospital with a 104-degree fever…

It’s unbelievable to walk into the hospital and tell the doctor I had a snake bite.

Finally, the fever went down. They gave me antibiotics, and luckily the snake WAS de-venomized, but twelve days later, the snake died.

He was de-venomized, but maybe I wasn’t! (laughs) Jake told me: ‘You killed my snake, dude…’

Our feud generated a lot of interest after that angle, even though they couldn’t show it on national TV. It was too graphic. They could only show it with a big X over the screen…"

"I have never loved snakes… and I didn’t like Jake’s snake either! (laughs)

They would bring him a snake at the beginning of a tour, and he would be responsible for that snake until the end of that tour. Then the snake guy would come back and get the snake, and Jake would go home.

He’d have to take that snake to his hotel room every night. He’d put it in the bathtub and run water, keep it moist or whatever. And the snake got out of his hotel room; I don’t know how many times. Can you imagine – sleeping in a hotel room, and you gotta get up in the morning and think, ‘I wonder where the snake is…’

And you know, the snake would be under the bed, coiled up in the bedsprings (laughs) and you know, he was bit a few times…

I know it was a real burden for him at times to haul that snake everywhere.

The scariest one he had was the cobra.

This cobra is chewing on Savage’s arm. And I thought, ‘You know what? There is not enough money to make me do that! (laughs)

Relive an Uncensored Version of the Infamous Snake Bite Angle Between Randy Savage and Jake Roberts Below:

This story was one of many included in our long-form piece, 5 Wrestling Animals and Their Chilling Stories Outside of the Ring. 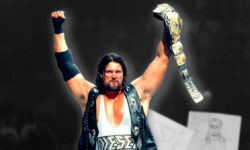 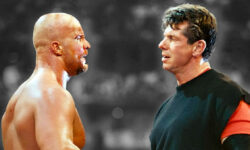 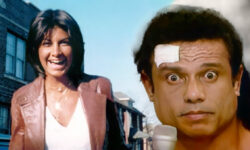 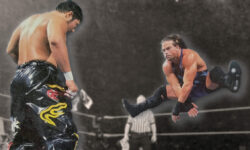 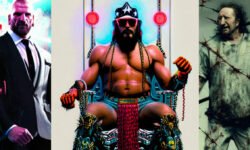 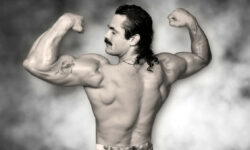 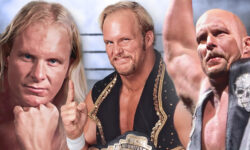 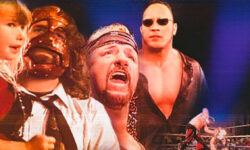 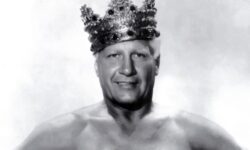