Hornswoggle has been known as many things- a leprechaun, a mini gator, a little bastard and even an illegitimate son. Though one thing people may not realize is that to his co-workers backstage, he is simply known as a bully.

During a YouShoot interview in 2014, Brodus Clay opened up about Hornswoggle’s bullying tendencies. “He’s a bully, he is a bully,” Brodus said of Hornswoggle. “He is a verbal assassin. He picks, he judges… he’s just a little evil guy.”

Others open up about Hornswoggle’s oppressing nature.

In Jon Robinson’s book, ‘Rumble Road Untold Stories from Outside the Ring‘, released in 2010, Kofi Kingston had much to say about the little ruffian…

“Me and Hornswoggle travel together all the time, but I don’t really let him drive because his car back home has pedal extenders that enable him to keep his feet at a normal length so that if the airbag goes off, it won’t suffocate him. When we’re on the road, the rental cars don’t have these pedal extenders, so if he wants to drive, he literally has to pull his seat all the way up to where his chest is on the steering wheel. God forbid if we ever got into an accident and the airbag went off, he would suffocate. So I never let him drive. But whenever we travel with The Miz and Evan Bourne, they both always play it up like they want Swoggle to drive. They really try to get everyone riled up, like, “Hey, why don’t you let Swoggle drive? What are you going to do about it?” But I’m like, “Look, I will not get in the car with him. Aside from his safety, I’m really concerned for our safety because Hornswoggle drives pretty recklessly. He’s not what you would call a conscientious driver by any means.” So I think it’s safer for everyone if I do the driving . . . or if anyone but Swoggle gets behind the wheel. That’s when we’re the safest.

So we were all driving through Canada this one time, and Miz and Evan were busting my chops about wanting to have Swoggle drive. So when we stopped to fill up for gas, I went inside to pay, and apparently, they were all conspiring the whole time to see what I would do if Swoggle got behind the wheel. So when I got out of the gas station, Hornswoggle was in the front seat. At that same time, I saw The Miz start to get out of the car. Now, me and Hornswoggle travel and we spend so much time together that we can look at each other and start to read each other’s minds. So at this point, as soon as The Miz left the car, I made eye contact with Hornswoggle and I knew exactly what to do.

Now, all this time, Miz thought he was going to rib me. He thought he was working with Hornswoggle and he was on the good side of the rib. But not for long. When Miz left the car, I jumped in and Hornswoggle took off, leaving Miz at the gas station. I thought Hornswoggle would just drive up like ten or fifteen feet and we’d all get a good laugh and let The Miz back in. But it turns out, our hotel was about a half mile away and it was directly across this highway from the gas station, so Hornswoggle just kept on driving. He left The Miz at the gas station, drove all the way to the hotel, parked the car, then we sat there and watched The Miz try to cross this busy highway on foot and make his way back to our hotel. He was out there dodging traffic, then he finally made his way to this really big field that he had to cross in order to get to the hotel. Hornswoggle made him walk back the entire way. I couldn’t believe it.

It’s funny because Hornswoggle can’t be more than three and a half feet tall, but he bullies The Miz. He really is a bully, and there’s nothing The Miz can do about it.”

Heed this warning: Do not mess with the Swoggle!

THE MIZ and DANIEL BRYAN: Too Good To Ignore 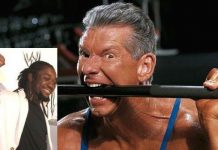 The Time KOFI KINGSTON Challenged VINCE MCMAHON To A Fight