In 1998, The Big Show (then knowns as The Giant) found himself being heckled by a fan who would not back down until The Big Show had to take action in the form of a huge right hook!

In this day and age, we live in a very social media-heavy world, and you most likely would have seen by now through the eyes of social media that there is an unfortunate number of pessimistic people who will pick on those in the limelight and personally attack them from behind the keyboard.

With that in mind, imagine if someone tried that nonsense in the real world, right to a wrestler’s face. Imagine even further that this happened not just to any wrestler, but to “The World’s Largest Athlete” The Big Show! Not too bright, right?

What happened the night The Big Show punched a fan?

The incident took place at The Marriott Hotel where the wrestlers would stay after performing at The Nassau Coliseum in Uniondale, New York. A witness that was at the hotel bar helped paint a picture of what happened, sharing what heckler Robert Sawyer was saying to The Big Show. Comments like, “You’re so tough, you’re not that big. Go to another federation!” were just a few of the diatribes flying out of Sawyer’s mouth.

It wasn’t solely verbal, however. Sawyer tried, and let’s put a huge emphasis on tried, to get physical with The Big Show too by shoving him in the chest.

YouTube channel CaughtOnTapeTV has the surveillance footage, and the reporter on the story explains:

“Paul Wight [The Big Show] is a 7-foot, 420-pound pro wrestler. They call him ‘The Giant.’ Last June [1998], after a wrestling match at Nassau Coliseum, The Giant went to check-in at the next door Marriott Hotel. What happened next was caught on the hotel surveillance tape.

Thirty-year-old Robert Sawyer, 6’6” and 220 pounds, approached The Giant, who waved him off at first. Next, witnesses say Sawyer started gesturing and insulting The Giant to the hundred or so fans gathered there.

But when Sawyer made an obscene gesture [believed to have been the DX crotch chop], The Giant asked him to stop. Next, The Giant and some witnesses claim Sawyer pushed The Giant in his chest.”

Big Show was interviewed in the following days.

“I asked him very politely to stop doing all the cursing and stuff… And then he got up in my face.”

His reaction to being shoved, “Self-defense. I mean, it looks crazy coming from somebody as big as me but it startled me, it did.”

The reporter finishes off with, “This punch broke Sawyer’s jaw and landed The Giant in Nassau Criminal Court on charges of third-degree assault.”

The court sided with the wrestler here, and the charges were dropped. A couple of young fans attended the court hearing offered these words of support for The Big Show:

“He was defending himself.”

If there ever was a way to shut a loudmouth up, The Big Show demonstrated how!

Watch a news report on this incident below: 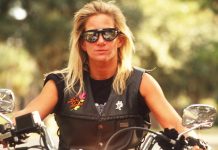