In the spring of 1985, when the World Wrestling Federation hype machine was in full effect, making the media rounds for the debut of a little event known as WrestleMania, a very real incident between Hulk Hogan and Richard Belzer took a disastrous turn on live television.

The very first WrestleMania was headlined by the villainous Rowdy Roddy Piper and "Mr. Wonderful" Paul Orndorff taking on the heroic team of Hulk Hogan and Mr. T! Now, T wasn’t hired by the fed for his impressive in-ring ability. He didn’t perfect his craft doing his time on the territories. No, he and Hogan were hot off the heels of their roles in the movie Rocky III, and as such, were two of the biggest stars in the world at the time!

The two muscly monsters were making appearances on talk shows across the country. Little did they know that their segment on Richard Belzer’s talk show Hot Properties would go down in history for all the wrong reasons.

On that fateful date of March 27th, 1985 (five days before WrestleMania), things got off to a poor start even before the camera’s started rolling.

According to Richard Belzer in a 1990 interview, "The day of the show, like three or four hours before the show, someone who works for Mr. T calls my office and says, ‘Mr. Belzer, Mr. T will not do the show unless there are 50 children in the audience, and some of them crippled.’ I said, ‘Wait a minute, you want me to get some kids and cripple some of them and get them to the show? What do you mean?’"

It was three hours before airtime, and the show was set to be broadcasted live across the nation. Belzer worked swiftly and sent his staff to a nearby school where he was able to fulfill T’s last minute, baffling request.

T was in a bad mood all day. He showed up pumping a flexible bar and wouldn’t stop using the workout device throughout the interview, but Hogan apparently came off friendly and respectful. If anything went south during the show, at least Belzer could rely on The Immortal One to keep it professional, right?

Everything seemed to start fine, with Belzer directing all the questions to Hogan as Mr. T seemed more intent on breaking his bendy bar record. Belzer asked Hogan what made him change from a bad guy to a good guy. Now, keep in mind this was 1985, and there were no podcasts or exposes telling how Dustin Rhodes nearly had breast implants or how The Undertaker is afraid of cucumbers. There were certainly no brilliant websites telling you about legendary backstage pro wrestling stories. No, kayfabe was alive and well, my friends, and Hogan answered the question expertly, saying when he arrived, he was naive and needed management from Freddie Blassie, but soon he wised up and realized all he really needed were his prayers, his vitamins, and his Hulkamaniacs.

Then Belzer asked to be shown a move. Mr. T was the wise one here and actually said no, but Belzer kept insisting, and soon enough, Hogan found himself face to face with the hapless comedian.

What was Hogan to do? He was out there trying to sell tickets and buys to the biggest wrestling event of all time. Today was not the day to expose the business. So from that point of view, you could almost understand Hogan’s motivation as he held Belzer in a front chin lock, sending him into unconsciousness.

What is perhaps a little less forgivable is when Belzer "fell to sleep," Hogan dropped him like a plate of hot spaghetti, causing Belzer to hit the ground at warp speed and cracking his head on the stage floor in the process.

Whilst Belzer was down for the count, Mr. T kept repeating, "He’s just sleeping," no doubt trying to keep the audience calm. An audience which, if you remember, consisted of 50 children that Mr. T demanded to be there to pay witness to the horrific event. Whilst T kept speaking, Hogan remained silent, terrified at the prospect that he may have just murdered a man on live television.

I don’t know if you have ever been choked out, dear reader, but I have, and let me tell you, it ain’t fun. It’s like someone presses the hard reset button on your mind. Everything goes blank. The first thing you need to work out is who you are; the next is where you are. After a few seconds of laying motionless, Belzer began the memory boot process whilst Hogan lightly slapped him across the face.

A few beats more, and a combination of shock and showbiz programming kicked in. Belzer leaped to his feet, found his mark on the nearest camera, and told the viewer at home, "And now we’ll be back after these messages from you know who!" He then turned to reveal the blood that was unknowingly leaking from the back of his head.

Richard Belzer didn’t make it back from commercial. He was taken to a local medical facility where he received nine stitches to close his wound. Hogan apologized for the incident, again keeping it in kayfabe but managing to say he is used to working with trained professionals, and this is the reason why you shouldn’t try this at home. The Hulkster comes across as genuinely sorry and does quite a good job of keeping face with his apology. Mr. T, however, decided that this would be a good time to cut a promo on how Hogan is the champion of the world and that you don’t mess with him. The whole affair came off as quite heelish, keeping in mind Hogan and T were supposed to be the good guys!

In the aftermath, Belzer sued and settled for $5 million out of court, and WrestleMania went on to be quite successful from what I hear. So I guess everyone was a winner and all publicity is good publicity!

Watch Hulk Hogan choking out Richard Belzer in full below: 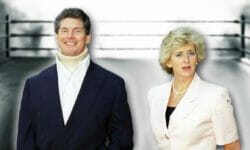 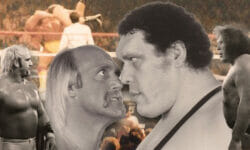